We almost didn’t bother with this one, initially thinking it was a re-run of Planet of the Sharks, one of the films we covered during last year’s Fishtival. On balance, we likely shouldn’t have troubled the DVR. It’s by the same director, appears to use the same sets, arranged in a slightly different way, and is little or no better than its predecessor. It’s part of that small sub-genre, the post-apocalyptic shark movie, though unlike Planet, the sharks are actually somewhat significant in terms of plot. 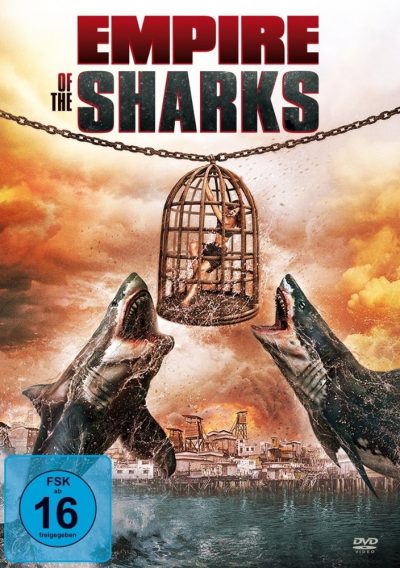 The setting, however, is almost identical: the oceans have risen to drown almost all of the land, yadaa-yadaa, and the survivors are eking out a living on small artificial islands. They survive at the whim of  Ian Fien (Savage), a feudal lord who owns the only desalination plant, powered by those he takes from the islands in his fiefdom. He enforces this discipline with his platoon of flying sharks. Ok, they don’t technically fly, but they’ve very good at leaping – which makes the open walkways everyone uses on the islands a poor design decision.

He controls the fish, through a pair of power gloves that are wired up to a device like a ham radio, and… something something mind-control. It turns out there’s a “shark-caller” out there, Willow (de Lange) who uses more organic methods, having inherited the skill from her father. She has just become part of the latest batch of abductees, scooped up by Fien’s minion, Mason Scrim (Pienaar), and is working on the wheel which powers the desalinator. When Fien realizes what he had, he tries to force her to give up the secret. Fortunately, her pal, Timor (Amstrong) puts together a plucky band of renegades, who plan an attack on Fien’s well-guarded fortress, with the aim of rescuing Willow and the other captives.

It’s every bit as blandly uninteresting as it sounds. Actually, re-reading the above paragraph, it’s a great deal more blandly uninteresting than it sounds. There’s a lot of sitting around chatting about attacking, rather than actual attacking, and if you’ve seen one scene of people being tied to flotation devices and dunked in the water, for the sharks to eat, you’ve seen them all. The poverty of the film leads to repeated use of the same footage: by the end, we were calling the sharks out in order, as they exited Fien’s underwater pen.

Pienaar makes something of an impression, coming over as a low-rent version of Severus Snape, though this may simply be in comparison to the utter lack of energy projected by the rest of the cast. Even Savage apparently can’t wait to get back to the beach-side South African hotel he was promised. It all ends with Willow and Fien playing a tennis match with a shoal of sharks: I can almost imagine them thinking in their little piscine brains, “Make your damn minds up, will ya, and let us eat someone!” Like its predecessor, you could remove the sharks entirely from this, and you’d have something resembling a film. It still wouldn’t be very good though: if 2018’s schedule shows us Galaxy of the Sharks or whatever, we are unlikely to make the effort.