A festering love-child of Hellraiser and The Thing, with H.P. Lovecraft as the godfather, this may be little more than a hodge-podge of influences. However, those involved largely know what they’re doing and have put together some of the most impressive bits of icky body horror since fellow Canadian David Cronenberg was operating at full throttle. 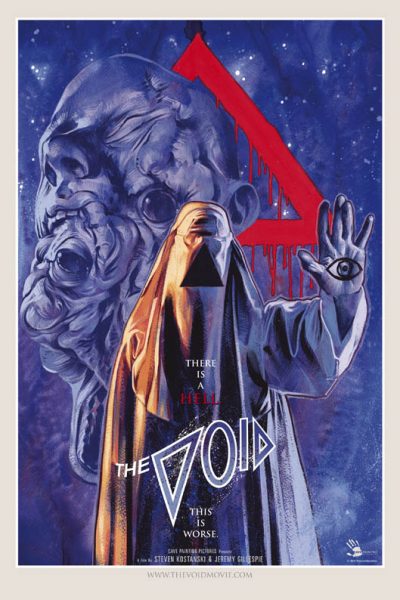 Deputy Daniel Carter (Poole) finds a man crawling along a remote road, and takes him to the nearest hospital – which is on the verge of closing up shop, after a fire in the basement. There’s only a skeleton crew there now to take care of the few remaining patients, including his ex-wife, Allison (Munroe). Multiple incidents rapidly follow of what can only be described as “increasingly weird shit.” A few samples: the hospital is cut off by white-robed figures; a nurse slices her own face off, and is shot dead by Daniel; two gun-toting men enter, seeking the rescued man; oh, yeah, and the deceased nurse transforms into a tentacled monstrosity that eats people.

It all turns out to be part of a cult plot to defy death, on which the leader has been working since his daughter passed away. The plan is to use a pregnant woman in the hospital as a vessel for his late daughter’s re-birth. I’ll say no more than that – less out of avoiding spoilers, than because the film is spectacularly vague on the specifics. There’s not even a Lament Configuration here to act as a McGuffin for the trans-dimensional hopping and resurrection, though both the cult leader’s final form and the brief glimpse we get of the other side, owe an obvious debt to the first two Hellraiser films.

I’ll be charitable and assume the makers were deliberately going for an air of mystery, rather than simply half-assing the details. They get this benefit of the doubt because, holy hell, the monstrosities unleashed are amazing. Absolute proof that, even on a low budget (exact amount uncertain, but they raised eighty grand for the monsters on IndieGoGo), purely practical effects can still kick the arse of CGI. There’s a spell of about 15-20 minutes here that are as good as I’ve seen out of the genre over the past decade, and came closer to genuinely disturbing me than any film since Martyrs.

Just a shame they weren’t able to sustain this level of imagination, or at least build it on a foundation of greater coherence. For it could have ended up on the same level as those horror classics mentioned earlier. Instead, it’s merely a solid and entertaining piece of low-budget cinema, and there’s absolutely no shame in that. I’ll certainly be interested to see what Kostanski and Gillespie come up with in future: on the basis of this outing, they possess no small amount of talent with the physical side of special effects.