First off, I find myself inexplicably irritated by the twee way the lead actress spells her first name. WHY THE FUCK DO YOU NEED TO DROP THE C, YOU PRETENTIOUS BINT! I’m having to resist the urge to go into full stalker mode, sneak into her house, and update her resume, website and Facebook page, putting it back in there. Wander the town, looking for posters with her name on it, armed with my trusty black marker. Hover over her bed in the middle of the night, whispering “You are Mackenzie with a C…” into her ear, over and over. 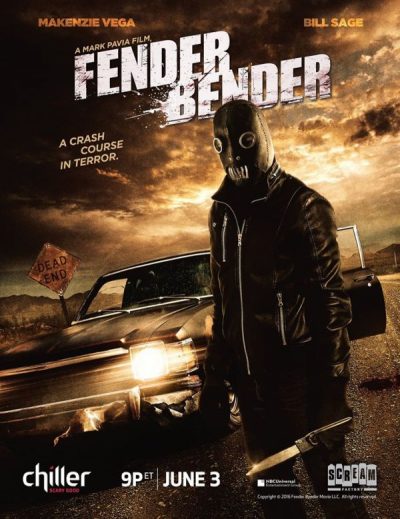 Contemplating such things is likely more entertainment than you’ll get from this underwhelming flick, which wants to be a slasher version of Death Proof. I’m sure we’ve all been waiting breathlessly for that. After breaking up with her boyfriend, Hillary (Vega) gets into the titular accident at a stop sign, and like the good teenage girl she is, exchanges details with the other driver (Sage). What she doesn’t know, is he is an interstate serial killer, who uses the information he gets to stalk his victims. And with Hillary’s parents out of town on a trip, there’s nothing now standing between him and his prey. Well, except the ex-boyfriend. And two of Hillary’s pals, who have popped round for a slice of cake and some sympathetic chit-chat.

This doesn’t exactly go from 0-60 in five seconds. Indeed, rather than burning along the horror highway, it first prefers to detour through the residential neighborhood of Teen Drama Estates, driving carefully, and watching out for small children and stray animals. There’s some angst because Hillary’s parents are supposed to have taken her on the trip, but leave her behind, blaming her for the accident; this is a plot thread that goes absolutely nowhere. Add in a sprinkling of political correctness, the heroine being from a Hispanic family, and one of the friends being “flamboyant,” shall we say. Neither of these aspects matter either, and you wonder why they bothered.

Finally, you get to the slash part of this stalk ‘n’ slash. And by this, I mean, that’s what you’ll be saying: “Finally…” And it’s not bad, with some surprisingly gory kills that almost rekindled interest. Pavia is a horror veteran, though has been out of the director’s chair for close to two decades, since he helmed Stephen King adaptation, The Night Flyer. The main problem is that this film feels like it would have been retro, even in the nineties. Not in a good, “Let’s use practical effects” way either; more, you’ll be spending the second half thinking, “Aren’t the victims complete idiots?” I mean, this is now 2017. No teenager would ever leave their phone behind, even if chased by a masked serial killer. And who doesn’t know that merely stabbing a masked serial killer and setting them on fire is only what you call, a good start.

I should cut the film some slack, because Pavia is deliberately going for that nostalgic feel – note the phone with an actual cord in the picture at the top. [Kids! Ask your parents…] It’s not unlike The Void in that way. The problem is, the slasher film has been post-moderned to death, beginning with Scream – which itself is now more than two decades old. The curtains have been yanked back, revealing the masked guy with the stabby implement, and films like this tend just to convince me, those drapes can’t ever really be pulled shut again.