I’m still not sure what the title of this means. A more appropriate title might be Abrupt Right Turns, because the film seems to delight in taking these. Just when you think you’ve got a handle on what’s going on, there’s a sudden change in tone or content, which yanks the carpet out from under your feet, and leaves you re-assessing what has gone before. It feels a bit like David Lynch – in particular, probably Inland Empire for its meta-approach to cinema, being a film about film-makers. But to Carrell’s credit, he maintains a somewhat tighter grip on proceedings, rather than wandering off into the forests of deepest Whatthefuckistan like Lynch did. 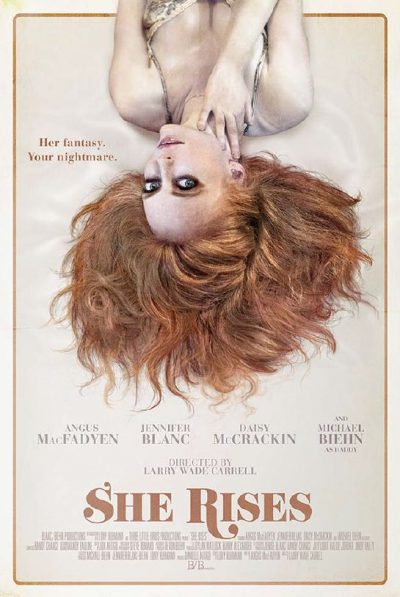 Director Kat (Blanc) and her temperamental veteran star, Conor (Macfadyen) are on their way to a location shoot when they get lost. They park up at the remote homestead inhabited by Rosebud (McCrackin), for whom the lecherous Conor instantly had the hots. His “casting session” for the apparently innocent farmgirl is interrupted by Daddy Longlegs (Biehn), a near-mute, who is roughly equal parts hair and gaze (“Great stare,” intones Conor, and he’s not wrong there). After a session of drinking, the visitors go to bed – and that’s where things become really weird. As in Conor starring in a bizarre, neo-softporn version of Hamlet weird. And it only gets stranger from there.

I’m not prepared to commit much more to an explanation. It seems to be that Rosebud is some kind of roadside succubus, luring unwary travelers like Conor in, then sucking their life-force out: it’s a legend which he explicitly refers to at one point. However, how much of what the film depicts is genuine experience, and how much is a fevered dream, is very hard to say. Could be a lot, could be none at all. And that’s before we get to the final section, after Rosebud appears to lure in another victim (a hitch-hiker, played by the director). This renders everything that has happened previously, even more uncertain.

For a film which I can’t remotely claim to have understood, I still enjoyed this surprisingly much, helped by the nods to film culture. Movie geeks will have fun spotting all the references, from Citizen Kane to The Twilight Zone. The four main cast members are all excellent and command your attention. Macfadyen, who also wrote the script, is intensely magnetic: I would genuinely want to see him do Hamlet after this. There’s more than a little Jennifer Tilly about Blanc, and that’s not a bad thing at all, while McCrackin’s initially artificial-seeming performance makes a great deal of sense given the succubus theory.

Then we have Biehn: while he doesn’t get to do much beyond deliver that stare and recite Shakespeare,  his unblinking look is the most unsettling I’ve seen in a film for a while, and worth the price of admission by itself. You’ll reach the end of this, and likely want to watch it all again, to see if you spot clues you initially missed, or snort derisively and toss it on the discard pile. I wouldn’t argue with you either way. Yet despite the confusion it all generated, I kinda liked this, and will certainly remember it.