Credit is due here for not being short of imagination. I’m not sure the quality of the ideas is worthy of praise, but there’s no denying the volume of them. We start with a shark that has a nozzle on its head. From this, sprays toxic and corrosive green goo over everything nearby, when it is not flying through the air like an Olympic-level gymnast, to engage in more traditionally piscine pursuits, such as the biting-off of heads. But, wait! There’s more! 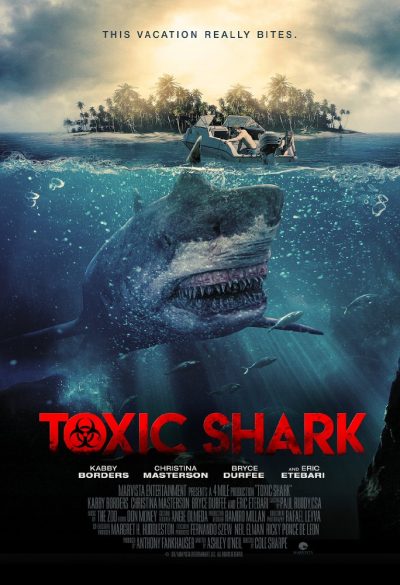 For as if this combo of a shark flick and a bukkake video wasn’t enough, the goo also turns those whom it touches into flesh-eating zombies. According to the movie, it is one of the side-effects of arsenic poisoning, a major compoment of the green slime. Fortunately, arsenic is also highly inflammable, so in the end, all it takes to send the shark up like a roman candle is a well-placed distress flare. Damn, what percentage by volume of arsenic did this shark contain? I guess the even rarer sodium-based shark was an evolutionary dead-end [Hohoho, a little highly reactive alkali metal comedy there, folks]

Unfortunately, the invention begins and ends at the shark, with the characters here being the worst we’ve had to endure for a very long time. Like 5-Headed Shark Attack, it’s set in Puerto Rico, which appears to be ground zero for this kind of thing. Specifically here, an island singles fitness resort, where Eden (Borders) has gone for a bit of R&R with her gal pals after a break-up with Sam (Durfee). What are the odds, it turns out he and his bros have opted to do exactly the same thing. Awkward!

Goddamn it, these are immensely irritating people on both sides of the gender battle, so at least they’re equal opportunity annoyances. 10 minutes in their bickering, passive-aggressive company and we were signing up to be on #TeamToxicShark.  To give you some idea, one of the party was significantly more interesting and fun to watch, after she was turned into a flesh-eating zombie.  Things do improve a bit once they stop fighting with each other, and go after the shark. While there’s not much explanation of quite why an arsenic-laced fish evolved a spray blowhole, this is probably a good thing, given the loose grasp on science described a couple of paragraphs above.

So the characters – I absolutely refuse to use the word “heroes” for this bunch of sub-millennial slackers – find themselves stuck between the hungry shark and the no-less peckish zombies. It’s an odd mix, almost attention-deficit disordered as it bounces between the two threats. Yet, it’s still vastly preferable to what passes for witty banter between the friends. When they’re being chased from one peril to the next, they don’t have time for that kind of thing, and the movie is markedly improved as a result. However, I’d have been happier if the film had finished with the entire island, and everyone on it, being wiped out by an unexpected volcanic explosion.