You don’t know how closely I came to writing a strongly-worded letter to The Asylum and the SyFy Channel half way through this one. Because it appeared that we had been sold a defective product here, with the shark which was terrorizing Puerto Rico possessing only four heads, not the five we were clearly promised in the title. Hell, even the characters specifically stated, on several occasions, it was a four-headed beast. What kind of post-truthiness world are we living in, I thought, where we have to put up with a 20% deficiency in the cranial department from our B-movie monsters? 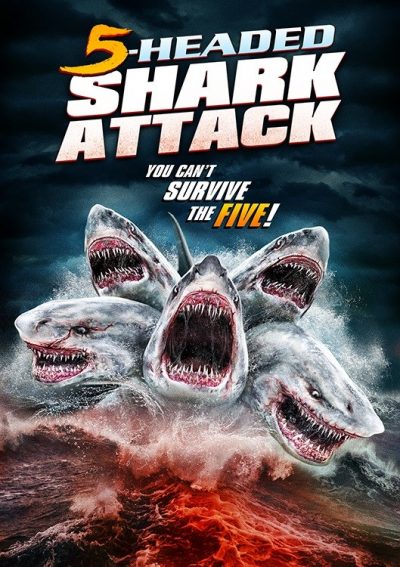 Then I discovered the glorious truth. Yes, there were four heads at the front. But there was another at the rear of the shark, effectively on the end of its tail (something conveniently ignored by the poster, right). You must feel for that head, forever stuck looking backwards, and having to rely on its colleagues occasionally reversing into food. On the plus side, it was certainly a great deal less crowded back there, and the location in splendid isolation would have its advantages over being stuck between the Oversharing and Poor Dental Hygiene heads. I envisage a sequel, where the fifth head decides to go solo, citing creative differences.

It would probably be more interesting than this lackluster effort, which takes one of the more outrageous and potentially interesting monsters, and sticks it into a largely tedious plot. After the shark appears out of nowhere and begins eating people around Puerto Rico, Thaddeus Young (Holzmann), who runs a struggling aquarium, sees a lifeline. He tasks his marine biologist, Dr. Angie Yost (Howard, unconvincing beyond her stock scientist eye-wear), with capturing it. After initially poo-pooing the idea of a shark whose count of heads surpasses one – “What next, sharks that fly through tornadoes?” – she reels in a bunch of easily-digested yet bland interns, along with veteran shark hunter Red (Bruno), to take to the seas. Lazy digital carnage, featuring embarrassingly frequent repetition of footage, ensues.

This follows on the heels of 2-Headed Shark Attack and 3-Headed Shark Attack, though I have seen neither, so am unqualified to comment on how this compares. I’m not sure why they apparently chose to skip the four-headed version. If you’re going to do that, I’d have said you might as well miss out five- and six-headed sharks as well, instead going full hydra on us, with a 7-headed shark. It may simply prove the law of diminishing returns. A two-headed shark is certainly freaky, compared to a one-headed one. But once you’ve gone down that road, adding another one, two or three doesn’t do a great deal extra.

As a result, the head at the back was far more memorable, than all four at the front combined – even when they are leaping out of the ocean to drag down a rescue helicopter, in a scene which packs nowhere near as much a wallop as it should. I would likely have found greater amusement if this film had been entitled Reverse Shark and had been devoted entirely to a predator with its head where the tail should be. Call me, SyFy: let’s do lunch.