As we get to the end of the year, we’ve been having a clear-out of the unwatched DVD shelf – mostly because we need the room for the Blu-rays, which have been steadily expanding from the other end. This has seen us really going back in time, and dredging up stuff that has been sitting there for well over a decade. We’ve already reviewed some: The Game, The Dead Want Women and The Perfect Education 2 are all the results of DVDpocalypse 2017, and this is the latest candidate. 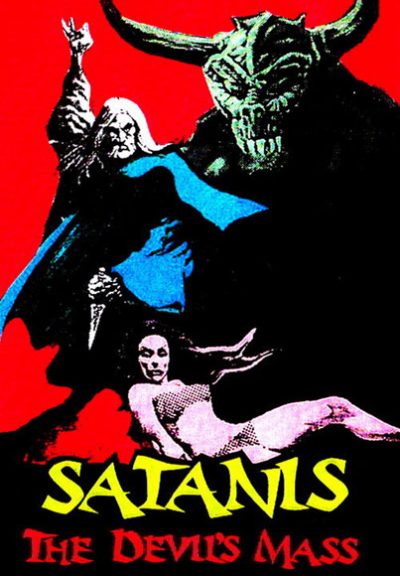 It was the main feature on a Something Weird disc. This also had the usual slew of trailer and shorts, including the most painfully tedious 29 minutes we’ve ever endured, a soft-porn and flaccid penis-stravaganza entitled Sex Ritual of the Occult, plus Sinthia, the Devil’s Doll, a film Ray Dennis Steckler directed under a pseudonym. I dozed off during that, so it will not be covered here. Satanis, to our surprise, turned out to be a documentary, looking at the Church of Satan, founded in (where else?) California during the sixties by Anton Szandor LaVey. [Coincidentally, he was name-checked during last weekend’s viewing, Satanic. Isn’t it always the way: you wait ages for a LaVey-related film, then two show up at once…]

There are three separate elements to the film: interviews with LaVey and members of the church; interviews with those living nearby; and footage of the church’s ceremonies. The interviews are, at least, occasionally interesting, though inexplicably, no-one is identified as to their role, or even name. If you didn’t know who LaVey was going in, this wouldn’t enlighten you, though you might be able to figure it out, since he’s the particularly Satanic looking one – the bloke with the goatee, wearing the cape with the horns. The amusement is mostly the weirder stuff, like them keeping a lion as a pet, until they were made to get rid of it [the feline would fit in with LaVey’s claims of having been a lion-tamer in his youth – but like almost all his stories, there is little or no corroborating evidence for this].

Philosophically, I can’t find much to argue with in LaVey, and his decision to create the church as a reaction to the guilt-ridden, control enforcement processes of other religions. Though I am also forced to wonder whether it was created as a commercial product, inspired along the lines expressed by L. Ron Hubbard, years before he invented Scientology: “If you want to get rich, you start a religion.” If so, it proved rather less successful in financial terms, despite its notoriety. I can see why, because, Christ almighty (blasphemy intentional), it’s excruciatingly dull to watch. The proceedings depicted here make a Catholic mass in the original Latin seem like The Wicker Man.

Basically, they consist of LaVey reading from his Satanic bible, with all the enthusiasm of someone reciting train delay information, while his acolytes sway. The “music” is also by LaVey and with quotes used advisedly, because I kid you not, one track consists of nothing except a slow drum-beat, that marginally speeds up, stops, and then starts slowly again. Even the nudity is something from which you’re more likely to avert your eyes. Yes, they have a naked woman as an altar. I’d rather stare at a marble slab than the 53-year-old who forms it. Were seventies movie-goers really so desperate to see breasts? Overall, I’m left suspecting that the Church of Satan is part performance art, part scam, and likely a prank much closer to the Church of the SubGenius than any “true” religious organization.