This initially looks like it’s going to be comparing and contrasting two groups: those who adopt the trappings of Satanism for shock value, with those who truly wallow in the dark arts. Four college kids, on their way to that gurgling vortex of hipsterism, Coachella, pause in Los Angeles. This is so that two of them, the aforementioned  “style Satanists”, can do an occult version of the Starline tours, visiting spots like the Hollywood site of the Tate-Labianca murders. Matters start to go wrong when they stumble across an apparent group of real Satanists, staging a ceremony that is interrupted barely short of ritual sacrifice. The tourists end up rescuing the victim, only to discover she may not be quite what she seems. 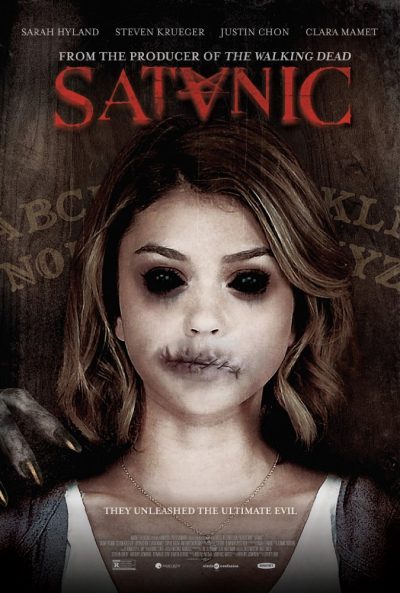 Although this isn’t saying very much, the movie is at its best when pulling the carpet out from under the viewer, which it manages to do on a couple of occasions. Things either aren’t what they appear, or the significance of an earlier incident is not immediate apparent. However, to enjoy those moments, you have to sit through an awful lot of dead air. For instance, the Satanic touristing is almost entirely irrelevant to proceedings, and the film quite simply takes far too long to get to the main course. Any pleasures to that point are light in the extreme, and it did not take Chris long to decide that she wanted to see all four of the leads meet horrible fates.

While I didn’t feel quite as negatively about them, I will admit, they did not offer many reasons to empathize with them. Hyland, playing the obvious “final girl”, comes the closest to offering likeability, though this could be a result of us being almost entirely familiar with her through her role as lovable goofball Haley on Modern Family. This movie, it must be conceded, might have been improved if Phil Dunphy had also turned up and done a few self-deprecating magic tricks. [Modern Manson Family, perhaps?] On the other hand, Modern Family would likely be improved with more scenes of Haley making out with other ladies, like we get here. Oops. Did I say that out loud?

After a lot of faffing around La-La Land, things do eventually kick off with a gruesome death – history repeating itself – as shown above. This becomes somewhat more interesting, since what is released as a result of that death, sets its sights on the remaining characters. Of course, merely killing them would be too brisk: they have to be chased around various locations in Los Angeles County first,  and terrorized, before ending up, more or less, where they arrived in the city. It’s also disappointingly low on gore or imagination, once we get past that first kill. Seriously: someone literally goes into a portable toilet and is never seen again. That’s not exactly the stuff of nightmares. Though I guess this particular portable toilet, being located in downtown LA, might well be.