Considering this is about one of the most infamous kidnappings of all time, it’s really not very interesting. The aspect which will stick in my mind is likely how half of these Dutch kidnappers appear to be sporting Australian accents. This is not a good thing, unless it was intended to stand in for regional Netherlands accents somehow. It’s possible the makers were this subtle – director Alfredson was responsible for the second and third entries in the Millenium trilogy, so should know his way around a smart thriller. I wouldn’t bet on it, however, since there’s not much else here which would lead me to expect such invention. 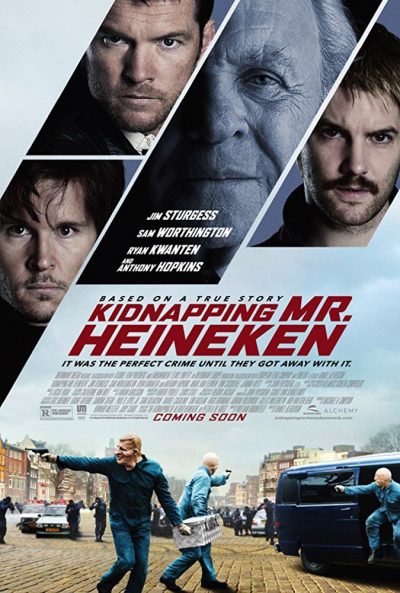 This is more paint by numbers than any kind of Dutch masterpiece. A group of five friends, partners in a wobbling construction business, decide to alleviate their cash-flow problem by capturing beer-billionaire Freddie Heineken (Hopkins) and demanding a ransom. They do some things that are kinda clever, like speaking German during the kidnap, in an effort to cast suspicion on the Red Brigade, and their method of getting the ransom is fairly ingenious too. As characters, however, the film fails almost entirely, with neither the performances nor attempts to give them back-stories, interesting or even adequate. The one person who stands out is Heineken himself, who handles his situation in a way only someone thoroughly accustomed to being obeyed would: by demanding slippers and a bath-robe. Though seeing Hopkins chained up in a cage, I almost expected him to request some fava beans and a nice Chianti.

It is only during these interactions with the kidnappers that we get any real sense of humanity from either side. Heineken is more concerned about the fate of his chauffeur, captured at the same time – albeit, only because he feels the servant is dispensable. I guess we cannot deny the accuracy, as far as the film is concerned, of his statement about wealth: “There are two ways a man can be rich in this world, he can have a lot of money, or he can have a lot of friends. But he cannot have both.” Given his billions, it’s a somewhat sad conclusion we must draw. But rather than letting the audience figure out the moral of the story for themselves, Alfredson flashes back at the end, to again show Heineken saying it. This is a good indication about the level of obviousness going on here.

With it being based on a true story, nor is there much suspense to be found. Though that might be because I remember the original 1983 events fairly well – while remaining vague, in case there are readers who don’t remember it, I know how this basically turned out. Certainly, it’s a sharp contrast, when put beside the less well-known (to me, at least) true story of Kilo Two Bravo, and the enthralling results it delivered. There’s another version of the same events, from 2011, which had Rutger Hauer as Heineken. If there’s not much here to make me enthusiastic, I will confess to being somewhat intrigued…