Despite over-enthusiastic reviews such as, “will make you curl up in a ball in your seat, daring to watch through splayed fingers,” or “contender for best horror movie of the decade,” I found this thoroughly underwhelming. For me, there was no ball, no splayed fingers, and it wasn’t even the best horror movie I saw this weekend. It mostly provoked an occasional check of the watch to see how much time was left, in a a film which seems more sub-Cronenberg in its combination of emotional chilliness plus internal horror, than anything else. 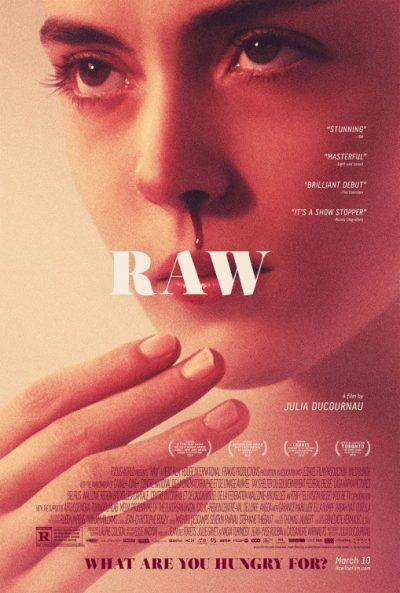 And in the unlikely event I ever decide to enroll for veterinary school in Belgium – please dissuade me. For, if this film is to be believed, the hazing endured by freshmen would be rejected by the worst fraternity in America as cruel and unusual punishment. The victim here is Justine (Marillier), a mild-mannered girl who has just arrived to join her sister, Alexia (Rumpf). Justine endures the tortuous initiation rites, mostly without complaint, until ordered to eat a raw rabbit kidney, for she’s a vegetarian.

Alexia convinces her sister she must comply, and in the wake of the unwanted snack, Justine develops a gradual taste for meat. First, this is in the traditional student form of an innocent late-night kebab. But she then graduates to raw flesh – and eventually, after an unfortunate incident, involving a bikini waxing and a pair of scissors, Alexia’s finger. [Lazy critics will insert the obvious “finger food” reference here] It’s all downhill from there for the rookie vet, despite her sister’s efforts to help, such as blaming the family dog for the missing digit.

It’s not dissimilar to Ginger Snaps, which used lycanthropy as a metaphor for coming of age, and the resulting transformation into predatory womanhood. Here, Ducournau uses cannibalism as a metaphor for… Yeah, that’s the problem here. If there was an actual message to be found, it was either badly garbled or lost a great deal in translation, because I wasn’t able to figure our what the director is actually trying to say. If it’s about the relationship between the two sisters, it’s strange how Alexia is largely absent for the first half. Is it pro-vegetarian? Anti? Or does that not matter? What about the gay room-mate? Why is that of relevance? I feel I should not have to be guessing these things.

What is clear that this opening up of Justine’s taste-buds is associated with her sexual blossoming, judging by the heavy-handed scenes of her slutting it up in front of the mirror. Yet, you could also read this as some kind of fascist metaphor. Justine needs the firm hand of authority to control her appetites, in order to function as a productive member of society, and without it, becomes a savage, feral creature. I’m fairly sure that was not Ducournau’s intent, however; that such a reading is credible would appear to be further evidence of the movie’s shortcomings. Don’t believe the hype. This is not “raw”, just severely under-cooked.