This was a late addition to our roster for the month, as a tribute to Karen, who died on October 23 at the age of 94. Here, he plays Frank, the foreman of a medical warehouse in Louisville, Kentucky, who accidentally breaks open a canister holding a reanimated corpse “lost” by the military, which has been sitting in the basement for decades. After the chemicals re-animate some of his medical specimens, as well as Burt and employee Freddy (Mathews), he tries to clear up the mess. Their plan is to burn the evidence in the crematorium of the mortuary next door, with the help of its owner, Ernie (Calfa). However, this just succeeds in spreading the contamination to the cemetery, bringing its residents back as well. This comes as a shock to a gang of punks who have chosen the location for a party… 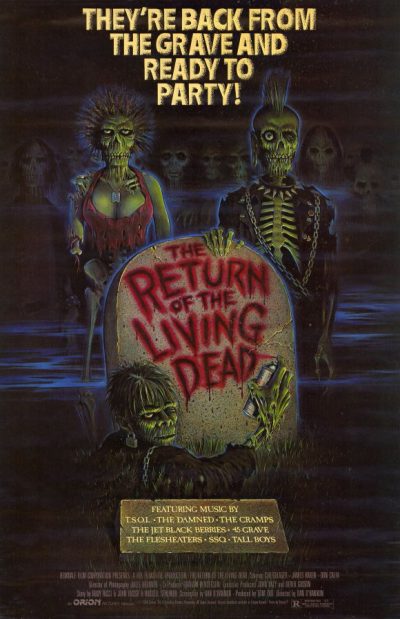 Originally intended as a follow up to Night of the Living Dead, to be directed by Tobe Hooper and filmed in 3-D, it took a radically different direction when O’Bannon – best known as the writer of Alien – took over from Hooper. The punk aesthetic came to the fore, not least in a soundtrack including contributions from The Damned and The Cramps, and this is perhaps the first film in which zombies were specifically interested in their victims’ brains. As we noted earlier, it may also be the debut of the fast zombie, and these are notably harder to kill, continuing to operate after destroying the brain [“You mean the movie lied?”], and even dismemberment.

In contrast to its predecessors, this also adds gratuitous nudity, in Linnea Quigley’s Trash character and her twin obsessions of sex and death [“Somebody get some light over here, Trash is taking off her clothes again.”]. Yet its downbeat ending is entirely in line with the original work. In that the army is responsible for far more deaths than the zombies, it perhaps echoes criticisms of the military Romero himself had brought up earlier that same summer, in Day of the Dead. Along this line of thought, it may also be significant that when we first meet Ernie, he’s listening to the Afrika Korps marching song. Despite this, the tone is generally considerably lighter, for example the zombies getting on the radio and urging the authorities to “Ssssssend… more… paramedicssss….”

It’s a film that doesn’t hang around: similarly to Night, we’re only a few minutes in before we get our first zombie, and there isn’t much slack thereafter. Especially after the cemetery becomes infected, it’s a high-energy piece of work. The transformation of Freddy and Frank is excruciating in both its duration and the pain, setting a standard not matched by many subsequent films – the latter’s decision to commit suicide by self-cremation felt particularly poignant in the light of Karen’s demise this week. It was successful enough to have spawned four sequels of its own: while I’ve something of a soft-spot for the perversity of part III, none have come very close to matching the energy and droll wit of the original.