What starts off as a relatively straightforward zombie film, gradually twists into something radically different. What, exactly, I’m far from sure: there are many theories, ranging from metaphors for fascism to the hero being a mass murderer in a coma. I would hesitate to commit to any of them, though each appear to have their merits. It’s a bit of a shame, as there was nothing wrong with the original concept to deserve such a lack of loyalty. It, along with Everett’s remarkable screen presence and Soavi’s visual style, would have been enough to carry this, without the need to head off into more obtuse landscapes. 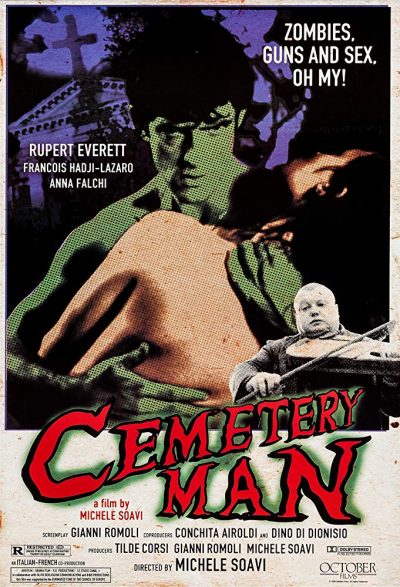 Francesco Dellamorte (Everett) is caretaker of the Buffalora Cemetery, which has a strange effect on some corpses buried there. Seven days later, they come back to life and have to be dispatched again. Francisco has tried to mention it to his boss, the local mayor, but he and his “developmentally disabled” assistant Gnaghi (Hadji-Lazaro) more or less just deal with it. Matters get more complex, first when he falls for a mourner (Falchi) at a funeral, who ends up as one of the resurrecting corpses; and, then, after a tragic accident leads to a motley collection of bikers, Boy Scouts and nuns being interred in the cemetery.

The film, however, wants to be more than this, and in the second half, Francisco’s grip on reality becomes a bit loose, to put it mildly. Any or all of the following may or may not happen. He meets two further incarnations of his obsession, one of whom is scared of sex until she’s cured by being raped by the mayor. He goes on a rampage through town, shooting those citizens who have previously mocked him. Much as Francesco wants to be arrested, no-one believes he’s responsible for these or other crimes. Eventually, fed-up, he and Gnaghi decide to leave town. Only to find that they literally cannot do so, because they’re figurines inside a snow-globe.

Dellamorte was originally a supporting character in an Italian comic [made into a largely-forgotten film, Dylan Dog: Dead Of Night]. This makes Everett’s casting a massive in-joke, since he was the inspiration for the Dylan Dog character. Still, he’s great: utterly world-weary, thoroughly sardonic and frequently with a cigarette dangling from one corner of his mouth. Hadji-Lazaro is also excellent, creating a thoroughly endearing character despite only being able to communicate in grunts (until the end, anyway), and Falchi makes for a fine “perfect woman”, alive or dead. Throw in Soavi’s ability to make even the most mundane scene look interesting, and to the half-way point you’ve got a sure-fire cult classic.

Unfortunately, I was much less interested in proceedings, once Soavi throws the carefully-established rule-book out the window, and opts to go for a far looser, “anything can happen” approach in the second half. This feels like it was being made up as it went along, though given Soavi was a protege of Dario Argento, I suppose this should not come as a surprise. If the visual side still remains interesting, the entirely deliberate aversion to making any goddamn sense eventually ends up being an irritant, and the ending is more likely to provoke a WTF?-ish shrug than any deeper thoughts.

Original review This is simply bizarre, yet so deliciously surreal it’s impossible not to be charmed by it. Everett is utterly sardonic, having come to terms with his daily (or rather, nightly) duties as a zombie-slayer, and is initially the most well-balanced character in the town, alongside grotesque assistant Gnaghi (Hadji-Lazaro). It’s ideal casting, since Everett was the inspiration for his character in the book on which this is based. Been a long time since I’ve seen this, and I’d forgotten how totally both he, and the whole movie, go off the rails by the end, to an ending whose interpretation is open to several questions. Wildly non-PC – one woman is cured of her penis-phobia by being raped – gooey, and with a strange beauty, this remains the best, and probably also the most heterosexual, film on Everett’s resume. B+