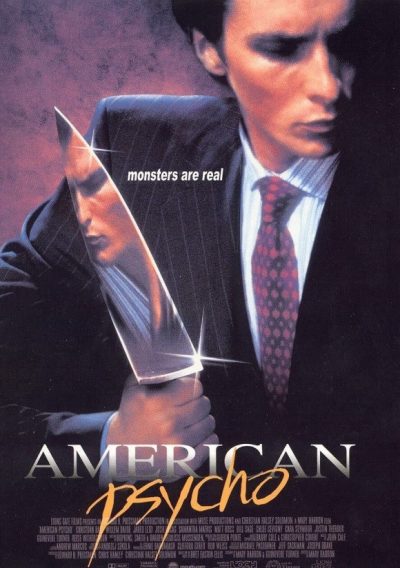 The gap between when this came out and its setting in time (1987) is now smaller then its release to the present day. Yet some elements have perhaps improved with age – the psycho lurking beneath a thin veneer of “caring” and social consciousness. is all the more relevant in the post-Weinstein/Spacey era. Though quotes like “I have to return some videotapes” will probably require a significant degree of explanation for the Netflix generation. They may also be confused by the references to Trump, in a setting that involves neither politics nor reality television.

This still enhances the slightly surreal edge here, where you don’t know how much of what lead character, yuppie Patrick Bateman (Bale), is experiencing, has any foundation in objective reality. He believes himself to be a serial killer, murdering homeless people, work colleagues, prostitutes, whoever annoys him, typically while expounding on the merits of Huey Lewis and the News, Phil Collins or Whitney Houston (albeit the last-named appearing only in an elevator version – sickly ironic, given what we know now about her actual life). Yet, as his sanity disintegrates around him, the evidence for this being no more than a Fight Club-esque manifestation of his rage and anxiety, murderous fantasies created as a coping mechanism, seems to increase.

It’s a great performance by Bale, likely reaching its peak in the scene where he and his pals are showing off their business cards. It’s amazingly intense, given that nothing truly happens. Still, the internalized rage Bateman feels over something so utterly trivial – cards with superior fonts and shading – is quite palpable, and gives you an insight into the character’s problems. The film doesn’t quite manage to sustain itself: watching its central character continue to function under stress is rather more… fun than watching him collapse into a blubbering idiot beside a phone booth (as with the video-tape thing, kids may need to ask their parents about that).

Credit also Harron, for unleashing more of the deadpan humour present in Brett Easton Ellis’s book, though on the other hand, the novel was considerably more opaque as to the line between Bateman’s fantasies and reality. I must confess though, I am curious what this might have been like, if the directors originally attached – first, Stuart Gordon, then David Cronenberg – had followed through with the project. Reportedly, the script Ellis wrote for the latter ended in a big musical number on top of the World Trade Center, to Barry Manilow’s Daybreak. If that doesn’t pique your interest, you’re perhaps as emotionally dead as Patrick Bateman. 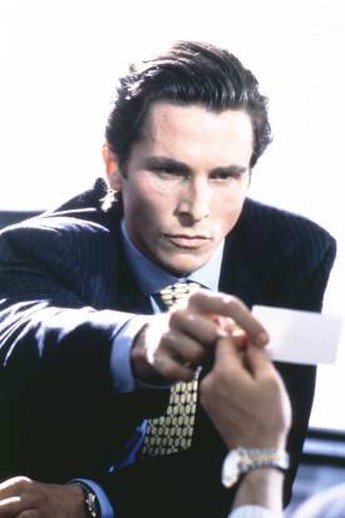 [2000 review] There are some basic problems with the concept here, mostly down to the film being a decade too late: satirising the 80’s in the year 2000 is like kicking a dead puppy. Still, there is enough malevolence here to keep you interested, and Bale is excellent as Patrick Bateman, yuppie scum par excellence, gazing into the abyss of restaurant reservations and business cards. Harron alters the balance from the book, downplaying Bateman’s misogyny (no rat scene here), in favour of playing with the question of how much is real, and how much just fantasy. It’s less a parade of designer labels too, though the lectures on pop songs transfer nicely, even if Whitney Houston clearly refused to let them use her version of The Greatest Love of All.