After a nightmare in which she sees her boyfriend Luca being stabbed to death, Julie (Dexter) wakes to find he has indeed vanished. She tracks him down to a seaside town, but it’s not long before someone is apparently trying to dispose of her. The trail leads to a villa owned by the middle-aged Gerda (Valli), and a bunch of bohemian types, of both sexes (one of whom is “Sybil Dunning”, presumably back before she bought an A). They first profess not to have seen Luca, then admit he was there, but definitely still had a pulse the last time they saw him. Well, probably… 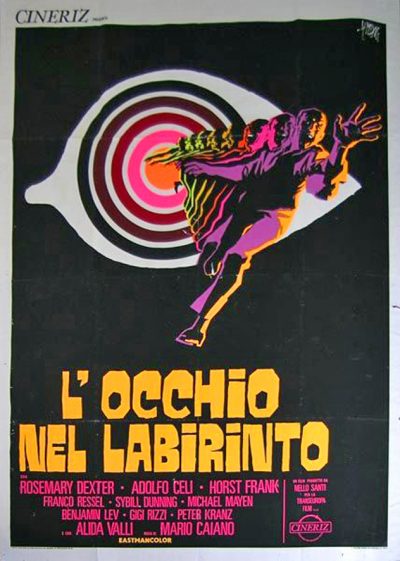 Further confusing matters is a brief phone-call, which appears to be from Luca, though Julie is helped in her efforts to untangle all this by local minor crime boss, Frank (Celi, best known as the bad guy in Thunderball), who holds a long-standing grudge against Gerda, and Gerda’s lover, Louis (Maien) – a relationship which does not exactly endear her to the hostess. There’s also a local orphan who painted a scene apparently depicting Luca’s death at the villa, except without showing the face of the person responsible. Julie has to figure out whether none, one or more of these weirdos were involved in Luca’s disappearance, while fending off further attempts on her life and sanity.

Since this is a giallo, it all ends with almost nothing being what you’d expect. The final solution probably counts as a bit of a cop-out, in the sense that a large amount of relevant information has been deliberately withheld from the audience, purely for the purposes of sustaining the mystery. But, again: hello, it’s a giallo. This is what they do… There’s some interesting stylistic flourishes, not least the opening dream, shot in a way that will have you turning your head to get things the right way up again. It is a little more restrained in terms of sex and violence than I expected, at least until someone loses their head at the end, though manages to squeeze in a transsexual to its convoluted plotting, several decades before squeezing in transsexuals was a hip thing to do.

Dexter makes for a decent heroine in the most part, even if I would call some of her decisions more than a bit questionable. For example, surviving a car-crash, then pausing only a few steps away from the wreckage to light a cigarette, likely falls into the category of “idiocy necessary to the plot” (see picture, top). The rest of the cast generally do well enough at putting over the necessary ambivalence, yet this also stops you from buying into feeling much in regard to their characters, since you’re uncertain whether they should be regarded as good, bad or somewhere in between. The end result is inevitably short in emotional impact, especially after the ending yanks the empathy carpet out from under the most sympathetic character to that point.