Cop Andrei Krutitsky (Zuev) is called to investigate what initially appears a fairly straightforward murder-suicide, in which a young woman, Olga, has killed her child before slitting her wrists, leaving a note that says, “We depart for a better world.” However, when he questions the woman’s boyfriend, the man is convinced her father persuaded her into the actions. Which is weird, because her father was killed in an industrial accident, twelve years ago. When the boyfriend then commits suicide too, Krutitsky goes to watch over Olga’s sister, Marina (Polteva) and her young daughter, Nastya (Konstantinovskaya). She reveals her father, Nikolai, has become one of the “forzi”. When the virtuous die, these spirits start trying to convince other good people to join them in the afterlife, by convincing them that their lives are terrible, compared to what is to come. With Andrei falling for Marina, he vows to stop her father from claiming her and Nastya as well, driven by his oft-expressed belief that “Life is beautiful and amazing.” 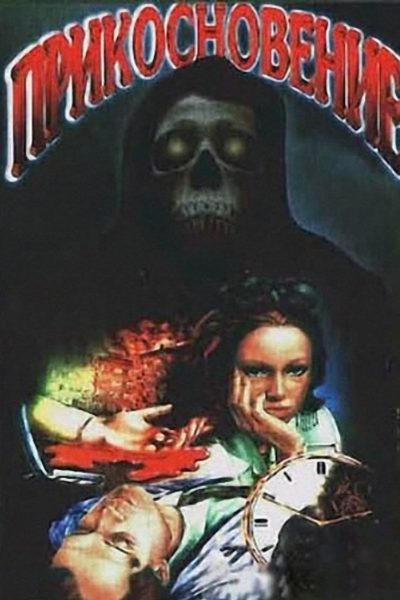 For a small-budget work, this punches above its weight, with not much in the way of special effects until the end (and I’ll discuss those in a bit). Yet you’ll be surprised how creepy and effective simple things like the photo of the dead father (top) are. There’s one particularly well-done sequence where Andrei is pleading for Nastya’s life in the grave where Nikolai, was buried, with the answers apparently coming in the form of announcements over the PA at a nearby train station. Nikolai eventually agrees to spare the seriously ill Nastya – only if Andrei gives up saying his favourite phrase. Yet that becomes increasingly hard, as he marries Marina and begins an apparently perfect life. After he breaks the deal, the film turns into a low-key version of Final Destination, with Andrei trying to beat the apparently unstoppably lethal hand of Nikolai in triggering tragedy.

Unfortunately, it doesn’t have the resources to pull this off, its deficiencies being most glaringly obvious when an earthquake triggers the collapse of the Crimean hotel in which the family are honeymooning. The execution is so bad, it’s not immediately clear even what has happened, and it’s so thoroughly distracting as to take away from the punch packed by the remainder of the film. Is it “the scariest Russian horror film ever”, as some have claimed? Well, technically true for the ones I’ve seen – though that’s because it’s #1 in a field which could probably be counted on a single hand (III: The Ritual, The Dyatlov Pass Incident and I’m struggling thereafter). It’s certainly not bad, and some of the narrative issues come from subtitles which barely pass as English – as with the effects, these taking the viewer out of the moment, by causing them to waste time puzzling out what is going on. Not the film’s fault. Yet you could argue it’s too talky, padded with scenes that simply aren’t needed. So it’s certainly not perfect, either.