This luscious-looking Russian fairy-tale just about skates by on visual appeal, trying to make up there, what it eventually lacks in narrative coherence. It’s set in an indeterminate time – the clothes look fairly modern, yet there’s not a car or contemporary appliance to be seen – in a town in the middle of a forest. There’s a sickness going around its inhabitants, perhaps related to the water, which attacks Mirra (Ignatushko), gradually sapping her strength. The local doctor (Abramichev) can do nothing: in desperation, her sister, Aya (Davydova), turns to the local priest, Father Herman (Gagarin). He has some books of rather… unorthodox, shall we say, knowledge, and suggests a ritual that might allow Aya to enter the mind of her sister, and find the source of her sickness. And if you thought the real world here is kinda weird, wait till you see Mirra’s subconscious. 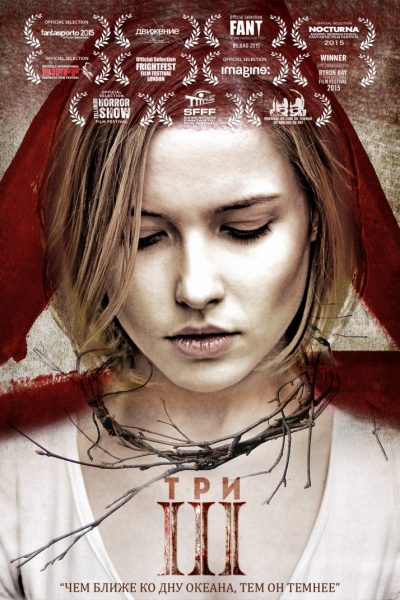 you looking for a cinematography show-reel? You’ve come to the right place. There’s a great visual style here; while one could argue there’s no particular consistent approach, most of it works very well. For instance, there’s a good chunk of drone work, but rather than being used for movement, it’s almost hovering over the town, like the eye of god. There’s also an animated interlude in the middle, when Mirra is reading one of Herman’s books, that is also memorable. But the deeper into the mental forest we go, the more difficult it is to see the wood for the trees. This comes to a head at the end where… something happens that left me thoroughly confused. And I’m not trying to avoid spoilers there: I’m simply too hard-pushed to explain it.

The results offer no shortage of atmosphere to be sure, yet the reliance on that also condemns the film to be little more than attractive background noise. It initially does a good job of setting its scene, feeling a little bit like one of the Grimms’ Fairy Tales. And even after it shifts closer in tone to Alice in Wonderland, when Mirra goes down the rabbit-hole of her sister’s mind, you’re still willing to enjoy the visuals and wait for the plot to reach a satisfactory and well-rounded conclusion. However, you’ll be sadly disappointed there.

If Khvaleev had managed to deliver anything approaching that, this could have been a cult classic. Instead, it plays almost like a feature-length pop promotional video; there were moments when I almost expected t.A.T.u to come slinking out of the shrubbery. The style here is so overwhelming as to crush beneath its weight, both the performances and the diminishing quantity of plot. I honestly couldn’t tell you if Davydova was any good in her role, because I was forever being distracted by the shiny, pretty things being dangled in front of me. I won’t say the time watching this was wasted. Yet by the end, I felt as if I had just finished an entire bag of Doritos, and was still hungry.