I’m not going to both synopsising this, since it’s one which should be well-known to everyone here. Personally though, it has been a good 15 years since I last saw this, and a lot of water has gone under everyone’s bridges since. I’d been wanting to re-watch it for some time, but was suddenly inspired to do so by a discussion with our son about how the term “snowflake” had become a pejorative. To me, that dated largely from its use by Tyler Durden (Pitt), berating his paramilitary recruits through a megaphone: “Listen up, maggots! You are not special. You are not a beautiful or unique snowflake. You’re the same decaying organic matter as everything else.” 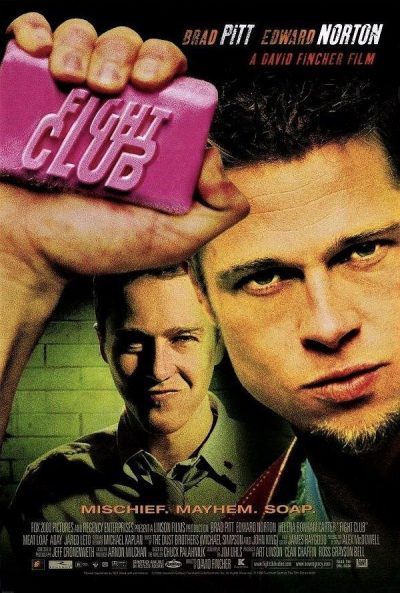 It seems that the cynical, almost nihilistic attitude which permeates this has now become the default setting for a large swathe of society. Indeed, Chris wondered whether this was some kind of recruitment film for the alt-right, a reasonable question given the black shirts, buzz cuts and rabid sloganeering. The film is curiously ambivalent about all that. There’s no doubt that Durden and the nameless narrator (Norton) say many things which make a great deal of sense, about people’s willingness to mistake material possessions for fulfillment and vulnerability to advertising. It’s summed up in catchy – almost jingle-like – phrases such as “The things you own end up owning you,” which are hard to argue with.

But on the other hand, the narrator is clearly barking mad. The Durden character is nothing but a projection of the protagonist’s own psyche, being all the “cool” things which the narrator wants to be. There’s an interesting theory that the main female character, Marla (Bonham-Carter) may be entirely illusory too, representing another aspect of the narrator’s personality. Indeed, you could make a case that just about anything in the film is the product of a deranged imagination – even the bits that appear to make logical sense. It’s a strange place to put the viewer. Is the film condoning its fascism as a sensible reaction to modern times, or condemning it? Why can’t you pick a reality/viewpoint and stick with it, Mr. Fincher?

That’s where the movie’s nihilism really kicks in. If it depicts the shallow consumerist hell in which the majority of people reside (not necessarily unhappily, it must be said), the alternative is not exactly painted in glowing terms either. Self-loathing, leading to a descent into madness and suicide? Where do we sign up? Fight Club is a film apparently only interested in pointing out flaws, in both society and the characters it portrays. There’s hardly anyone here who could even remotely be described as “likeable”, by the time the final credits roll, over the appropriate Pixies’ song, Where is My Mind?

Still, the performances pull the audience along on the trip, and this perhaps marks the start of Pitt’s best period as an actor. I note, perhaps pointedly, the presence of a movie marquee here for Seven Years in Tibet… And maybe Tyler Durden went on to use the boxing skills acquired here in his identity as a pikey bare-knuckle boxer? Have that as a fan theory. While Fight Club likely hasn’t stood the test of time quite as well as its reputation might have suggested, this is still capable of pushing some necessary buttons. It’s no less incendiary now, than at the time of its release, a couple of months after the Columbine massacre took young rage to the next level.

[Original review] Fincher’s output continues to impress, a steady curve up from the dismal Alien 3 to this, a crunchy and chewy little number that makes no pretence at having all the answers – or indeed, any answers at all – but asks some interesting questions about the pressure of modern life, and how we cope with it. For heroes Pitt and Norton, the answer is cathartic violence on each other, which leads to a more general attempt at rebellion. At first, it seems to be a comment on how even revolution can become prepackaged for the masses; then it flips off into a totally different direction, which is something of a pity, despite the new route offering plenty of food for thought.

Both Norton and Pitt are superb, the latter a major surprise; however, one imagines that despite much talk, the Academy Awards committee probably have their heads stuck too far up Tom Hanks’ arse to reward it. On the other hand, Bonham-Carter is an irrelevance, and is rapidly becoming the Traci Lords of mainstream cinema: forever trying to break past her stereotype, yet merely proving that she’s much better sticking with it. Intense, subversive, with an aura of potential lethality (which other film offers a recipe for napalm?), yet no threat to society (the recipe doesn’t work) – perhaps the most perplexing question is, how the hell did such a non-PC project escape from post-Columbine Hollywood? But I’m very glad it did. B+