When you rip off a classic Russ Meyer flick for your title, this comes with a certain set of expectations. Expectations this film is almost entirely unqualified to meet. What you actually get is a run-of-the-mill Saw knock-off, with Amber Stardust (Lane) and the other members of all-girl punk band Kill Pussy Kill, diverted on their way to a Halloween gig by the machinations of gas-station attendant, Dale (Grieco). He brings them into the clutches of the Mastermind (Rowen, but voiced by, of all people, the lead singer of Megadeth, Dave Mustaine). He’s a crippled and disfigured veteran, whose torments at the hands of Middle East insurgents left him with a severely warped sense of fun. He locks the girls in an extensive basement of torments, pitting them against each other in a series of survival challenges. 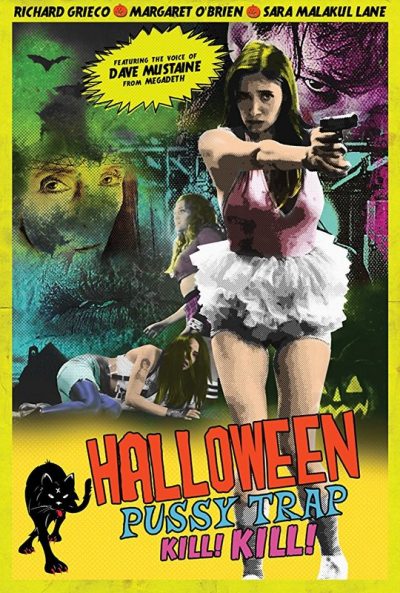 This is one of the cases where the villains are considerably more interesting than the victims. The band suck: it’s apparent from the lyrics to the song we see them perform, which go, “I love my car, I love my car/It makes me feel like a super superstar.” Fuck me. Did Henry Rollins die in vain? They’re bland special snowflakes, expressing their individuality in “wacky” ways like wearing ballet tutus; painful and horrific deaths are too good for them. The film also throws in two entirely unnecessary subplots. The first is the origin story for the Mastermind, an extended prologue whose relevance is never adequately demonstrated. There’s also DJ Speed (Stear) the guy who ends up following the band with his own mates, and also ends up in the basement maze. He was tossed from the band for a clumsy bit of date-rape, another angle that fails to gel with anything else.

What fun the film has to offer comes from Dale, and the Mastermind’s other henchpeople, who are gleefully savage – not least with the misguided trick-or-treaters who turn up at the door [complain about the volume of candy at your peril!]. Credit Kelly Erin Decker and Zahra Susan Ingersoll, as well as Grieco, for performances which actually deliver the fun excess you’d expect from a title such as this. It’s a sharp contrast with those on the other side of the basement wall, who are largely unlikable, when they bother to demonstrate any personality at all. Film-makers need to realize: being in a band doesn’t intrinsically make characters interesting, any more than them being roller-derbyists or burlesque performers [see also Pinup Dolls on Ice]

Oddly, the film also has a cameo by Margaret O’Brien, who appears in a chemical-induced dream sequence triggered by the Mastermind. I’m fairly sure that the Academy Award-winning star of The Canterville Ghost and Meet Me in St. Louis did not anticipate her career taking her into this title. To be honest, I’m likely to remember her scene, when just about every other in the film has been forgotten. Probably around Thursday, I suspect.