I’m ambivalent about the burlesque revival. The concept is fine, but too often, it seems to be little more than a self-important version of striptease. Look, just because you’re trying your damnedest to look like a tattooed version of Bettie Page does not make it “art”. And much like art, it’s rarely as good as it thinks. The fair amount I’ve seen, is as likely to be bad vaudeville as anything [the incident with the burning tassels, which flew off an artiste who should have been put out to pasture decades previously, will forever be seared onto my brain], and hardly ever reaches the level of genuinely erotic. 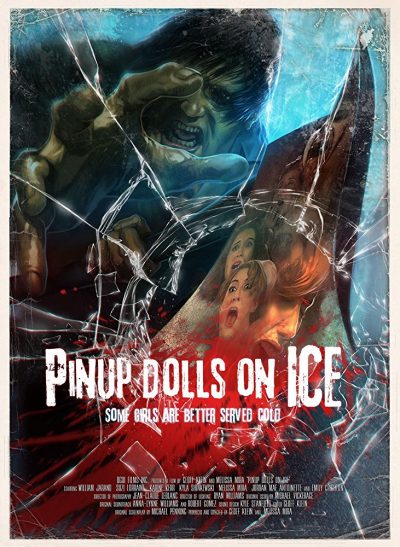 While there have been other films using burlesque performers, I am not able immediately to say whether the lead actresses here, the ‘Pinup Dolls’ troupe of the title, are actual burlesquers, or simply portraying them. I’m hoping it’s the latter, for they certainly nail all the more irritating aspects of the species in the first half, in particular the banal chit-chat and aggressive egotism of this band of Suicide Girl wannabes. Given the lack of actual burlesque – little more than one sequence – I’m guessing they’re just playing the parts of people, playing parts. It’s part-playing all the way down, folks!

Despite the area having been plagued by a recent wave of bloody killings, they inexplicably decide to accept a gig at a bar which seems to be located in a remote forest campground, somewhere in Canada. Yeah, these are not the sharpest blades in the tool-box, even by the low standards of slasher movies. Inevitably, they cross the path of Moe (Jarand), the burly killer with a fondness for deep-frozen meat popsicles, stemming from an incident from his youth. Without wishing to give too much away, there will be some vacancies in the Dolls’ line-up by the end of their tour.

Apparently a sequel of sorts to 2009’s Bikini Girls on Ice, also by Klein, which also featured Moe’s misadventures and by all accounts is entirely missable. I say, “of sorts”, since there’s no need to have watched the predecessor. This film lurches around in tone; elements are clearly trying to be comedic, such as mulleted local, Clay (Popoff) – with the emphasis strongly on “trying”. Yet once Moe gets into full killing mode, it’s fairly uncompromising in its brutality, and is all the better for it. What it lacks in inventive gore is largely made up for in volume, and it certainly helps that the cringeworthy dialogue is replaced with running and screaming.

In some ways, the slasher film and burlesque are similar: they’re both nostalgic throwbacks to a simpler era, which tend increasingly to rely on self-awareness, in order to survive these more modern, cynical times. They’re also equally difficult to pull off with seeming artificial and forced, and Dolls particularly struggles over its first half, failing to establish the characters as any more than irritants who deserve the (admittedly gruesome) fates to which they succumb.