I’m a big fan of cultural appropriation, especially at this time of year. Halloween is basically a festival which is now built on the basis of transforming yourself into something radically different. It’d be a peculiarly joyless event if everyone stayed inside their own cultural lane, the positives of seeing little American girls dressed as Moana massively outweigh any possible negatives, despite what Cosmopolitan might lecture. Popular culture brings the world together, I believe. Especially when sat in front of the TV watching lucha libre, while eating chicken tikka masala and enjoying a nice cold Pilsner Urquell. And if anyone wants to appropriate bagpipes, kilts and haggis, please go ahead. Let me know how that works out for you. 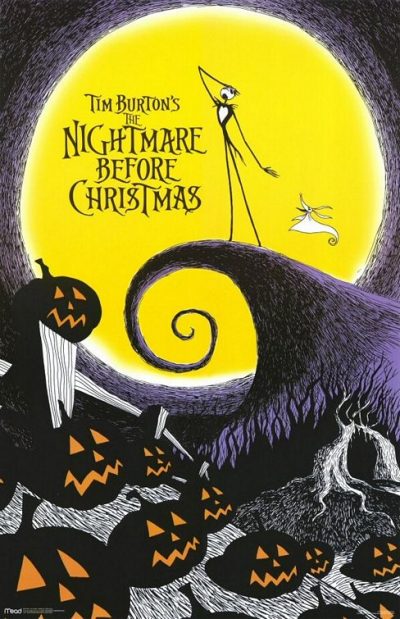 Which brings me to Nightmare, since it is basically Cosmopolitan‘s worst-case scenario: when cultural appropriation goes really bad. Of course, most of us don’t go quite as far as abducting the central figure of that culture, in order to take his place. That’s what the Mayor of Halloween Town, Jack Skellington (voiced by Sarandon, sung by Elfman), does to Santa Claus here. The kidnapping comes out of a misguided enthusiasm for the spirit of Christmas, which Skellington discovers while feeling particularly bored with his own holiday. His takeover results in a “ghoul Yule,” as it were, which is a complete disaster, until Jack realizes the error of his ways and releases Santa, in the (Saint) nick of time.

It is a kitschy and rather banal story, to be honest. There are other characters, such as Sally (O’Hara), the artificial girl who holds a distant candle for Jack, or Oogie Boogie, the closest the film has to an antagonist. Both feel kinda like afterthoughts, as if Disney sent over production notes requiring the makers to include one (1) romantic interest and one (1) villain. However, the execution of everything else more than counters these weaknesses. It’s the finest stop-motion animated feature of all-time: Selick couldn’t recapture the same magic in James and the Giant Peach, and nor could producer/creator Tim Burton, when he independently went back to the same well for The Corpse Bride.

This offers a near-perfect mix of design, animation and performance, all backed by Elfman’s score, which has become as close to an official soundtrack for Halloween as you could wish. Like the best animation, it creates a fantastical world, beyond anything live-action could hope to imitate. The stop-motion here then succeeds in making it “real” [it’s a method which may be particularly appropriate for the surreal and bizarre: Jan Švankmajer’s Alice is another example], to such a degree it renders the subsequent 3-D re-release, largely superfluous. It’s a film for children that, like all the best children’s films, is not aimed at them, so much as the kid in everyone.

The only question left is the thorny one of whether this is a Christmas film or a Halloween one. It takes place almost entirely after Halloween, in the period leading up to Christmas, making the latter its climax. Yet save for Santa, all the significant characters are clearly Halloween ones. I propose a simple solution: it’s both, and and as such, can and should be enjoyed on any occasion from the September equinox through Twelfth Night.