This Mexican film largely consists of watching Marta (Vega) go mad. She’s a spiritual medium – but, it appears, not a very good one, or she’d have foreseen one of her clients raping her. After she’s released from hospital, she decides to abandon the whole psychic business, and moves to a new apartment. Which is where at least three separate plot threads kick off. Firstly, it appears her attacker is stalking her. Secondly, she can see into a nearby apartment, inhabited by an unstable woman with violent tendencies. Third, Marta is plagued by visions involving a blood-drenched bathroom, which she suspects are related to the previous resident of the apartment. 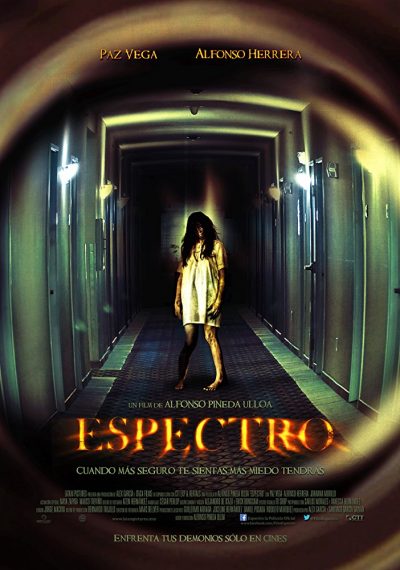 It plays like a clunky cross between Rear Window and Paranormal Activity, with the agoraphobic Marta setting up a high-tech surveillance system for the apartment, which misfires so frequently, I’d have returned the entire thing for a refund [I was also amused by the randomly spinning and entirely useless time-code provided by the system] And that’s not even including the stalker subplot, which vanishes without trace for much of the middle three-quarters, or the notion that someone is spying on Marta. Does any of this have a basis in reality, or is it just paranoia brought on by post-traumatic stress order, following the rape?

More importantly, does anybody care?

I know I found myself increasingly hard-pushed to give a damn about any of it. If Ulloa had stuck to just one of the threads, it would have been enough, especially when combined with the heroine’s fragile mental state. Is she being stalked, or not? Is the apartment haunted by its last tenant, or not? Is her neighbor a slice of fruitcake, or not? Throwing all of the above in, and stirring energetically, leads not even to a diminishing impact, but a significantly negative one. For here, these are not even interconnected strands of plot, they are entirely separate entities, and Ulloa isn’t good enough at the skill which is most essential to the task here – that of keeping all these paranormal balls in the air simultaneously.

This is a Mexican remake of a Colombian film from 2007, titled Al final del espectro, whose title seems to be a play on words, with “espectro” meaning both “spectrum” and “ghost”. There’s nothing quite so subtle going on here: it feels like a Mexican attempt to go down the road of J-horror, missing only the  long-haired, spooky schoolgirl. Vega’s performance needs to carry the film, considering she’s in virtually every shot, most of the time without anyone else to play off. It’s not bad, it just falls short of what’s needed – at one point, there were rumblings of an English-language remake starring Nicole Kidman, which might have worked better. Though it’s hard to be sure without knowing which of the problematic elements here were in the original, and which were added as misconceived improvements. I guess it’s nice to see that poorly thought-out remakes aren’t solely the remit of Hollywood.