For the most expensive European, and most expensive independent film ever made, this is surprisingly forgettable. Coming in at a budget of 200 million Euros [whatever that works out to in real money], you can’t necessarily argue the money isn’t up there on the screen. But visual spectacle is the cinematic equivalent of gorging yourself on Halloween candy: you’re soon filled with emptiness and regret. I watched Valerian less than 36 hours ago, and already am struggling to remember many scenes. I guess the bit where Rihanna was a shape-shifting pole-dancer was kinda cool? 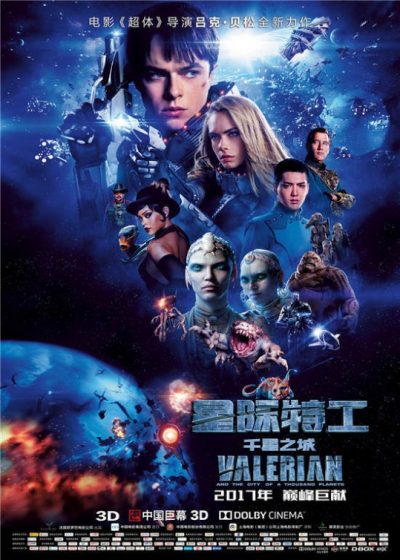 Yet it may be significant that this sequence could be excised completely, without harming the film in the slightest. The main problem is likely the central performance, where DeHaan’s Valerian is as blandly annoying as a carton of soy milk, coming over like a young Leonardo DiCaprio. And when I say young, the 31-year-old DeHaan looks about 12, certainly not old enough to be the major in the space police he’s supposed to be. There were times when I would have wagered he and sidekick Sergeant Laureline (Delevigne) were actually part of a Spy Kids reboot, and was anticipating the arrival of Danny Trejo. So when they start with the sexy Euro-banter, it’s all a bit creepy.

The film is set six centuries into the future, when the International Space Station has grown so large it has been pushed out of Earth orbit and has become an independent entity, an interchange for data and commerce between all forms of alien life. Beyond that, the plot is disappointingly generic, definitely over-stretched, and appears largely cribbed from Avatar [a film which Besson admits was a significant inspiration]. There’s a pacifist alien race, to which Valerian has a psychic connection, who are under threat from the evil humans and their military forces, led by Arün Filitt (Owen). At least Besson is not as stridently hectoring in tone as James Cameron.

The main appeal is the visual side, as you’d expect, with a range of impressive set-pieces, beginning with the Big Market, a bazaar which exists outside of our dimension and is part tourist attraction, part Silk Road, and all spectacle. Alpha, as the ISS is now known, is a similarly sprawling environment where you can strongly sense the influence of the original bande dessinée which inspired this – and, just as in most films based on comic books, it is significantly stronger on the look than the nutritional content. We’re back to the Halloween candy comparison.

Save for his Arthur kids’ series, Besson took almost the entire 2000’s off directing, and seems to have lost the knack: none of his output since has come close to matching the work delivered in the nineties. It’s clear Besson is a big fan of the comics, and that may be part of the problem. Someone less enamored of the source might have been more willing to adopt a more critical approach and address the almost inevitable weaknesses, such as the complete lack of any reason to care about Valerian. When Rutger Hauer shows up for 30 seconds as President of the World State Federation, it’s a criminal waste of talent. I’m left feeling kinda the same way about Besson.