This is, I suspect, the kind of movie you need to appear in, after spending 28 months in prison for tax evasion, and being hit with a demand by the IRS for $23.5 million. You have to take whatever roles you can get, including largely stupid alien abduction/invasion movies. That said, Snipes can still bring it as a bad-ass. If there’s one black redneck – bledneck? – who could stand up singlehandedly against extraterrestrials, it’d be Snipes. There are points where this nods to Predator, and I would watch the hell out of an entry in that franchise pitting Wesley against a hunter. Though “bledneck” sounds like something left on the cutting room floor of Blade: Trinity.

Unfortunately, this is mostly the story of five particularly annoying young people, off to a remote cabin for a weekend of poor decisions. They’re led by Brendan (Mitte) and Charlie (Goodacre), the latter all mopey after the death of his fiancée the previous year. This is what passes for character development, though Charlie fares relatively better than, say, Annie (Bilgeri). She isn’t given a personality, just an asthma inhaler. They all bump into Snipes’s unnamed, surly and aggressive hunter at a gas station, and for a while, it looks to be going down the slasher road, which might have been fun. However, there are mysterious celestial occurrences, and the American military are also involved. Their astronauts, one of whom was the hunter, had an encounter in space, from which they returned changed. It becomes clear it was just the start of an alien intervention in humanity of some kind, which is now happening on a much larger scale. 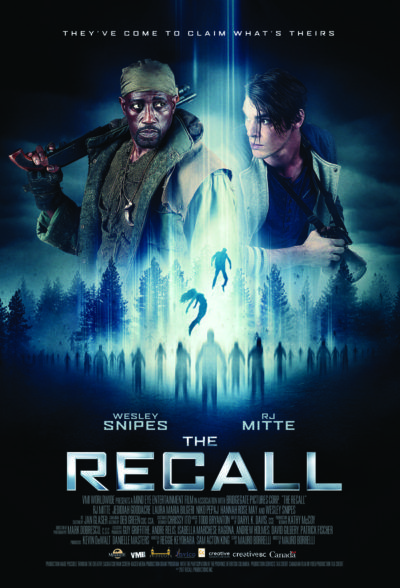 I can’t say with a straight face that this was a good movie, or even anything approaching it. However, I’ll confess to still being adequately amused: it plays like a SyFy Original, with better than average special effects. Things definitely kick up several notches whenever Snipes shows up, although that was not nearly enough for my tastes. The man remains coolness personified, and this harkens back to his glory days in the likes of Demolition Man. Let’s just hope he doesn’t end up going the Tom Sizemore route, trapped in a never-ending cycle of straight to streaming hell.

Everything else here is forgettable. You wonder why the aliens bother abducting the college kids, though if you’re intent on making humanity better, these five certainly offer plenty of scope for improvement. The government angle never amounts to anything much, the abduction was scarier the first time I saw it, in Fire in the Sky, and the film ends without much of a climax, just as it might have been getting fun. There is enough of an idea here not to make me tune out entirely. Except the script doesn’t seem confident enough in its core, and burdens proceedings with too much other stuff – largely superfluous and certainly not as interesting. They should have pitched this as simply, “Simon Phoenix vs. aliens”, and left it at that.