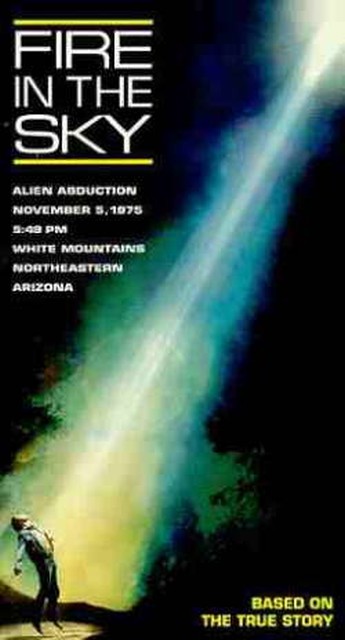 The Walton abduction case remains almost unique in UFO annals, in that it’s backed by supporting testimony, from other than those abducted. Here, a group of forest workers in Northern Arizona saw a craft of some sort, which zapped one of their number, Travis Walton (played by Sweeney) – the rest of the team fled in panic, and Walton vanished. Five days later, he turned up, with little or no memory of the intervening time, beyond encountering alien creatures.

This film is pretty much a straight retelling of events, concentrating more on local suspicions of foul play before Walton’s return centring on his co-workers. There’s also a genuinely creepy recreation of his purported experience, running more or less counter to Whitley Streiber’s friendly little encounters. Little or no attempt is made to investigate the claims – you yearn for Scully to come in and say, “But surely there must be a rational explanation, Mulder” – and several possibly pertinent facts are glossed over, such as Walton’s prior conviction for fraud. However, 25 years later, no-one has managed to come up with any real evidence of a hoax, and the only other alternative is some kind of genuine experience. It’s a real puzzle, and the movie can thus perhaps be forgiven for posing questions that it makes no attempt to answer