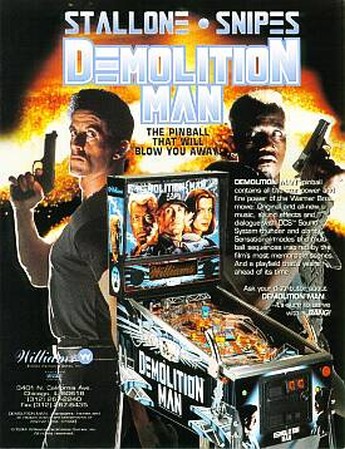 This box-office flop effectively ended Brambilla’s Hollywood career with his debut – in thirteen years since, his only feature is Excess Baggage with Alicia Silverstone, and he now seems to do art installations. And yet, I think this is Stallone’s best movie, Snipes’ best movie, and hell, even Bullock’s best movie, a brilliant mix of bad-ass action and social satire which has rarely been attempted, probably because irony is not a big seller in America. [I write this the weekend Borat comes out here, and am wondering how well that’ll do…] Right from the opening, an arresting shot of the Hollywood sign in flames, this grabs attention, but the slick start is only a set-up for the leap forward in time. When bad-guy Simon Phoenix (Snipes) escapes his cryogenic freezer, the cop who originally caught him (Stallone) is thawed out too, because society is now so cowed and docile, even the authorities can’t cope with Phoenix. Hence one of many great lines: “We’re police officers! We’re not trained to handle this kind of violence!”

I suspect Heathers writer Daniel Waters deserves credit for much of the smart sarcasm which makes this stand out. [The story is by Peter Lenkov and Robert Reneau, who also worked on the script; Reneau’s only other screenplay feature is Action Jackson, though Lenkov has written for 24 and CSI:NY on TV.] It gleefully slaps at political correctness, yet largely manages to avoid overt harshness, except, perhaps during one of Dennis Leary’s trademark rants, as freedom fighter Edgar Friendly (though it’s not a bad thing). Casting Stallone and Snipes is inspired, with both men pitching their performances perfectly. Stallone’s tongue-in-cheek approach is a particular delight, unlike in his “real” comedies, and one can only wince at how, this was originally planned to be Seagal vs. Van Damme. Sandra Bullock’s career, meanwhile, has been pretty much downhill ever since…