A straightforward, energetic monster mash-up: part Western, part horror, and while few of the elements are original in themselves, the combination is nicely-handled. The Dirt gang, under leader Dirk (Grieco), head to the town of Deer Creek for their next bank robbery, only to find the town eerily quiet. Too quiet. The remaining residents are holed up, in fear of the Tommyknockers, creatures released from their underground lair by mining operations, and which have put the town under siege since. The arrival of a group of violent thugs with few moral qualms might be just what Deer Creek needs. Or not. Especially since they are pursued by bounty hunter Tobin Horn (Beran), who leans toward the first part of “Dead or Alive” on the gang’s Wanted posters.

After a prologue showing the release of the monsters, this becomes almost a standard Western for a bit, before – a little like From Dusk Till Dawn – making a left-turn into a creature feature. The beasts look as if they came from The Descent, all pale skin and aggression and, while obviously “guy in a suit,” they’re executed well enough to pass muster. The general concept feels similar to Feast, with a disparate group forced to hole up, work together and figure out their enemy’s weaknesses and motivation. And, of course, there’s no connection to the Stephen King novel, made into a film. I wonder if that’s why “Night of the…” has been added for release, compared to the IMDb title? 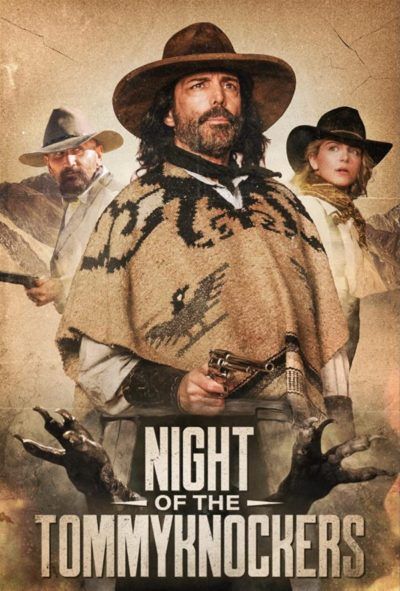 Regardless, it’s a solid set of influences from which this draws. The strongest suit though, may be the character work. There’s a lot of factions and individuals here, from whores to recovering drunks, yet the script does a good job of giving them personalities and stories… before killing them horribly, in a number of cases. Oh, well. Betty (Cole), Dirk’s other half, might get the best results, always seeming as if she’s the sharpest tool in the box. The effects are almost entirely practical in nature – of all things, I give special praise due to the blowing off of an ear in the gang’s first robbery. Maybe it’s a Tarantino reference? Ok, probably not.

You might find this a little slow between that point, and when the siege aspect truly kicks in. However, from then on, there’s very little slack, and this relentless momentum helps paper over some plot issues. For instance, if the creatures are so averse to light, never attacking during the day, why doesn’t everyone simply gallop out of Deer Creek as soon as the sun goes up? That said, it’s a testament to the pace of the movie, this didn’t actually come to mind until after the final credits had rolled. The same director and producers, as well as some cast, recently gave us Bridge of the Doomed, and this is notably better, mostly in the story, which does a superior job of meshing the elements into an engaging and fun B-movie.

The movie was released on November 25th, and is available through most streaming services.