Hmmm.  What to say that doesn’t sound negative?!  Okay, the standout performance is actually really very impressive.  Engaging and believable.  And.  Erm.  Oh dear.  It’s the CGI.  Otherwise, just reading through my notes, I’m not sure that this is actually worth writing up.  But.  I’ve started now, so, downhill on we go.

I suppose the most revealing moment is the arrival of Bill Nighy, who openly admits to never being ‘in character’, and his ‘performance’ is perfect for this utter drivel, which is around 80% close-contact, unrelenting, Thumpy-McThumpface CGI.  It’s decently realised if unrelenting and dull dull dull dull.  It’s also cliched.  Cut & pasted.  Flat.  For context, at the half-way point (46 minutes if you care) I paused the film to pop out to buy more beer, because I knew I was going to need more.  A lot more!

The story is that Frankenstein’s monster (Eckhart) has lived through much time, having been made inconveniently immortal by the good doctor.  Along the way he stumbles into a war raging between daemons (boo!) and gargoyles (hurrah!), all set in Paris in the modern day, centred around Notre Dame.  In the process our soulless creature bumps into the gargoyle Queen Leonore (Otto) who after a minor fracas, names him ‘Adam’.

The lead daemon is mister Wessex, aka Prince Naberious (Nighy), who wants either the notebook of his creator that Adam carries, or Adam himself, in order to unlock the secret of reanimating all the fallen daemons, and along the way there’s lots of blah-blah-because-of-this-and-that-nonsense.

At no point watching this film did I feel concerned, involved or excited.  It’s not dreadful, and actually quite watchable.  Just, it is god-awfully insipid and predictable.  Did I mention that it’s cliched too? 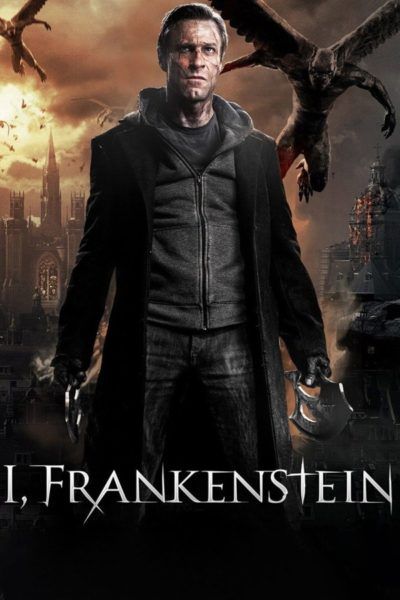 Yup. And thank god too!  Muttering, yawning as I stretch, glancing at the time to go and, oh look, we’re just in time for another CGI fight sequence.  Great.  ‘What fun’.  On the plus side Eckhart shows us how very well he can scowl, and oh-boy can he ever scowl!?  Super.

That this is based on a graphic novel is obvious as some of the scene setting and camera angles are dramatic, very well done and completely fitting.  Sadly however, it just should have been left on the shelf as such, and probably a good one too, based on the aforementioned visuals.

In summary, mostly because my brain is refusing to type more about this dross, it’s a D.  It has the feel of a film that wanted to become a franchise/series.  However, if you want a CGI-heavy beat-em-up then give it a go, as on that at least level it’s actually pretty well done.  If however you want something to enjoy on any other level, then avoid it – it’s turgid stuff with zero elan, excitement, humour or humanity.

[Jim’s review: Oct 2015] This noisy and energetic updating follows the story of Frankenstein’s monster (Eckhart) after the death of his creator. 200 years later, he’s dropped in the middle of a long, ongoing war between angels and devils. The latter us under demon prince Naberius (Nighy), who has figured out that if he can reanimate the dead, all his troops lost over the course of the struggle will be able to come back and possess the soulless vessels so created, giving him a decisive edge. Frankenstein’s journal, and his creation, may give him and pet scientist Terra Wade (Strahovski) the knowledge necessary to do just that. The angels, under their queen, Leonore (Otto), have no intention of letting this happen, naming the monster (with a frightening lack of imagination) Adam, and locking him up in their quietly, understated headquarters which no-one would ever notice.

Oh, who am I kidding: it’s a massive cathedral in the center of town, lit up like a fucking Christmas tree. Though no-one seems to notice, even when it’s attacked by swarms of hundreds of demonic entities, or the resulting lightshow which resembles Guy Fawkes night in a Ukrainian arms depot. Universally panned, I can see why, because “noisy and energetic” certainly doesn’t equate to good, with story logic containing massive holes. For instance, the demons have been aware of Adam’s existence for 200 years; after all, he dispatched a few of them while burying his maker. But there’s no indication Naberius had made any previous effort during those two centuries. to get his hands on this key component.

However, with the exception of the gargoyle/angels, which never appear better than mid-budget CGI and lack physical presence, it looks very nice: the backdrop scenery is particularly luscious. Proceedings are also partially redeemed by a better than normal cast for this kind of nonsense. Nighy and Otto deliver their lines with much more weight that they deserve, even extremely cheesy ones such as “I am a demon prince!” However, this is little more than an Underworld knockoff [and there are some common hands at work here], with Frankenstein’s monster thrown into the mix, because… reasons? And a stitched-together Eckhart represents a fairly-poor substitute for a PVC-clad Kate Beckinsale. C