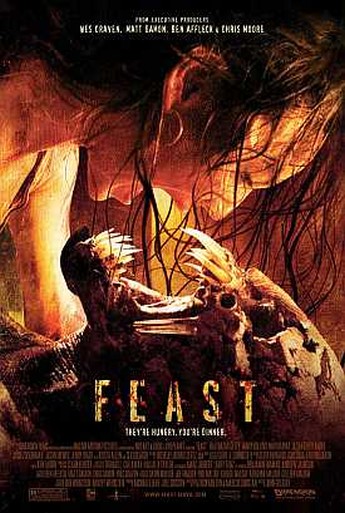 Straightforward and unpretentious, this takes a disparate bunch of low-lives, traps them in a bar, and hurls a clam of very vicious monsters at them. That’s it. Refreshingly, there’s no attempt to explain what the monsters are, where they come from or what they want – though the last-named is pretty clear, eating the human members, to be specific. The tone is set early, with the characters introduced by captions which also predict their life-expectancy; I’m not saying whether these are accurate or not. But only about ten minutes in, a blood-spattered Hero arrives, clutching a severed head, and all hell breaks loose immediately afterwards. Can they hole up until help comes? Or will the steadily-decreasing number of survivors be forced to make a break for it?

The results are a lot of fun, treading that risky line between horror and comedy with some skill, with a pace that never really lets up. My main complaint is the decision, likely required by the budget, to largely hide the monsters. I could cope with that as a principle, it was the methods chosen, of shaking the camera violently and cutting every two frames, whenever the beasts were on the screen, that irritated the hell out of me. Still, there are some copious and jaw-dropping moments of gore, and the dialogue is great as well: Henry Rollins, playing “the poor man’s Tony Robbins” comes off particularly well, and we wondered if he came up with his own lines. However, best of all is this one: “The monster’s cock is shut in the door!” 110 years of cinematic achievement have been building towards the delivery of that sentence.