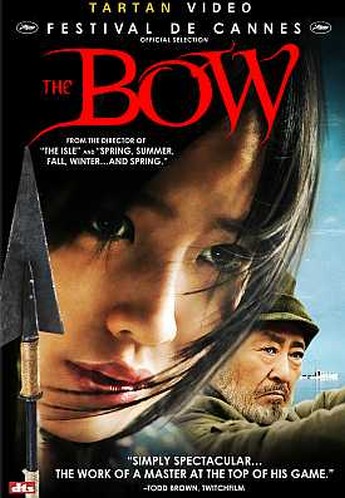 Certain words on the tear-sheet for this set off alarm bells: “elegaic…almost ethereal, elemental feel and truly engages the viewer… A rewarding experience… an exploration of minimalist art.” From previous experience, this kind of thing has a nasty tendency to translate into ‘dull as ditchwater’, so it’s no wonder this one sat on the shelf for a bit, until we could get together the Red Bull and matchsticks necessary for an excursion to the art-house. But it’s not so bad: while I can’t honestly say it’s our cup of tea, being too laid-back for its own good, there was only minimal amounts of “I’ll just close my eyes and listen to the dialogue.” Since this film is Korean, that’s probably a good thing.

Anyway. A 60-year fishing-boat skipper (Jeon) is counting the days till he gets to marry his teenage consort (Han), who hasn’t been allowed to set foot on dry land in ten year. But when one of his customers (Seo) sees the girl, he decides she needs to be released from her watery confines. Needless to say, the captain is less than keen on the idea, and the bow – which he uses to fend off anyone who touches her, as part of his fortune-telling divination, and to play music [I’m also wondering if the title has another meaning, as in the front of the ship? – comes into play. Things head towards a finale that…well, I’m not sure I could explain it very well, so let’s go with safe terms like “elegaic, almost ethereal and elemental,” shall we? 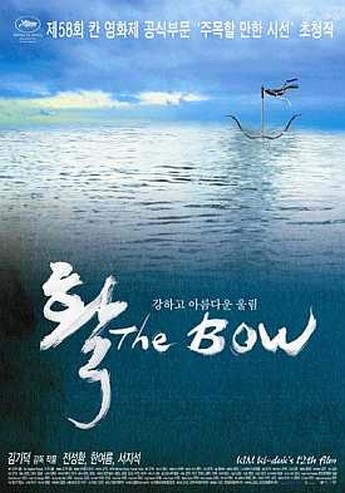 Kim does seem to have an affinity for the water; he’s best known for The Isle, similarly set largely on the water, with a mute heroine, and there’s also a scene here, involving fish-hooks, which echoes that film too (though is significantly more restrained on the fish-hook front). If dialogue-light, both Jeon and Han are capable of conveying their emotions with a look, in splendid fashion. I deduct points for an ending which seems as if Kim just kinda got bored and drifted away: he’s never been one for tying things up in a neat bow, but this feels particularly unfinished. Overall, while we’ll probably never watch this again, I’m not sorry we saw it, and we even had some caffeinated beverages left over. Hardly bow-ring at all…