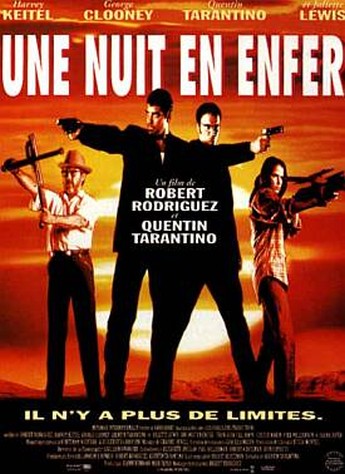 Rarely, if ever, have two such disparate halves come together to form such a satisfactory whole. The first half is a vicious piece of suspense, as the murderous Gecko brothers (Clooney and Tarantino) head into Mexico, taking a family (led by de-faithed priest Keitel) hostage as part of their plan. Then, just when they – and we – relax, the bar in which they’re holed up, suddenly turns out to be a vampire nest. It’s the kind of insane twist that, 99 times out of a hundred, would fail miserably; here, however, a combination of the talents of Rodriguez, Tarantino (who wrote the script based on an idea by Robert Kurtzman, the “K” in effects house KNB) and in particular Clooney, whose “deal with it” attitude is great, all pull the audience along in the fight to stay alive from dusk till…well, you get the picture.

Keitel’s son wears a Precinct 13 shirt, and that’s clearly an inspiration: good + bad guys inside, even worse ones outside. Yes, it doesn’t stand close inspection (why does one vampire turn into a giant rat? Why does the band explode?), and a lot of cool stuff is more or less stolen e.g. “What’s in Mexico?” “Mexicans” is from The Wild Bunch. But the supporting cast (Danny Trejo, Tom Savini, Cheech Marin, Fred Williamson, and last but not least, Salma Hayek) is great, and the overall impression is two fine movies for the price of one. It’s more proof that Tarantino the writer is a damn sight more palatable when he’s not teamed with Tarantino the director.