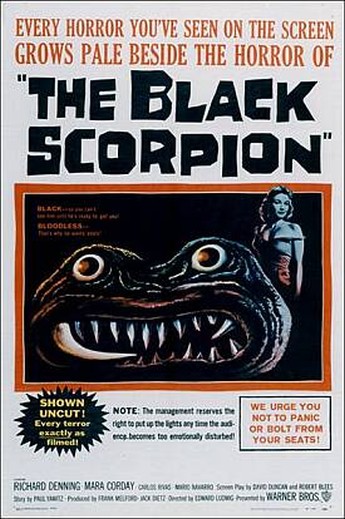 This 1957 giant bug flick owes a lot to Them! – L.A. ants become Mexico scorpions, but they share a creepy opening where we only hear the monsters and witness the destruction in their wake. And in both, impact is lost when we see the creatures close-up, here thanks to a ridiculous model head that’s simply laughable. Despite this, frequent repeat footage, and some mattes where the insect is just an outline, things improve markedly in long-shot, thanks to great FX work supervised by Willis (King Kong) O’Brien. The best scenes include a descent into the lair, an attack on a train, and the final confrontation in a stadium [where we learn it’s not wise to pick up a live 600,000V electrical dart with your bare hands. Though since the hero waves his loaded pistol at a baby early on, this isn’t exactly a safety-minded feature].

When the scorpions aren’t rampaging, it’s less fun, with some of the worst dialogue I’ve heard, an irritating Mexican kid, and a damsel (Corday) who can’t even stay on her horse despite supposedly owning a ranch. Two geologists (Denning and Rivas) first plug up the underground cavern from where a volcano has released the beasts, and all seems well, until aerial photographs reveal the king critter still on the loose, and heading for Mexico City! Time to break out helicopters, tanks…and a truckful of dead cow. That this makes logical sense, says something about the pleasures to be found here.