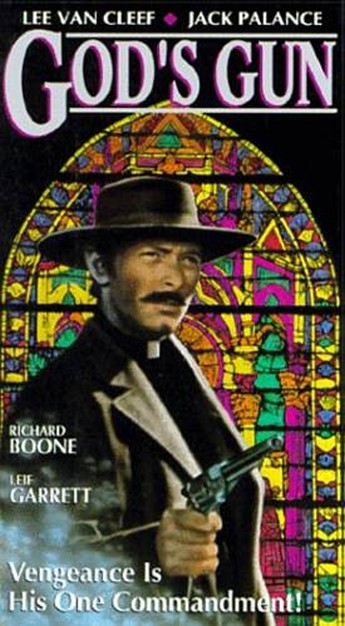 Actually, this stars Lee Van Cleef and Lee Van Cleef, since he plays a double role: first, a priest killed by Jack Palance’s gang after he tries to bring one of them to justice, then his twin brother Lewis who returns to town for revenge. It’s not a bad idea, and the cast go at it with enough gusto to keep this enjoyable and entertaining, providing you don’t expect Sergio Leone – despite the best efforts of the music composer to convince you otherwise. Danning plays local saloon-owner Jenny, and keeps more clothes on than you’d expect, though her claim to run a “respectable establishment” are somewhat hard to take when she employs staff named Chesty…

Her son Johnny is Leif Garrett, who’d go on to brief success as a teen idol, and is fortunately struck mute half-way through (for no readily apparent reason). He’s the one who heads across the border to alert Lewis to his brother’s fate, managing to stumble across the gunslinger partly by accident, partly because everyone he meets speaks English. [Things have clearly regressed since; never mind Mexico, that’s not even the case in Arizona now. But I digress] Did I mention this was actually filmed in Israel? It is an early Golan-Globus pic, after all, and is pretty much what you would expect from the pair. Still, while I happily throw up my hands and admit the many faults critical viewers may find, I’d be lying if I said I didn’t have a more than adequate amount of fun here.