“There are only four people on this island, and they’re all weird!” I don’t know why this line literally made me LOL. Probably the incongruity of it. I mean, the speaker is not wrong in the slightest: it’s just not quite what I’d have expected to hear said in a movie that’s set in 1846. It begins with a ship running aground in supposedly open water: only three of the crew survive, finding themselves on the shores of a remote, almost deserted Scottish island. The trio are rescued by the apparently friendly Douglas Innis (Hill), who is one of only four inhabitants left, along with his niece, Lanthe (Butler-Hart, who co-wrote this with her husband Michael). The rest left due to a catastrophic famine.

At least, that’s the story Douglas tells the castaways. The audience is already fairly certain that nothing so mundane is happening, simply from the way the stage is set, and we’re right to be suspicious. Mysterious noises, incidents and eventually disappearances and deaths are the order of the day, with Douglas trying to hand-wave away the increasingly loud requests for a boat back to the mainland from the trio. Midshipman Oliver Gosling (Hassell) and his colleagues discover the truth, which has ties to the legend of Persephone. They also discover the “famine” story is considerably less than 100% accurate, with the reality being darker, certain events having led to the whole island being cursed for the residents’ actions. 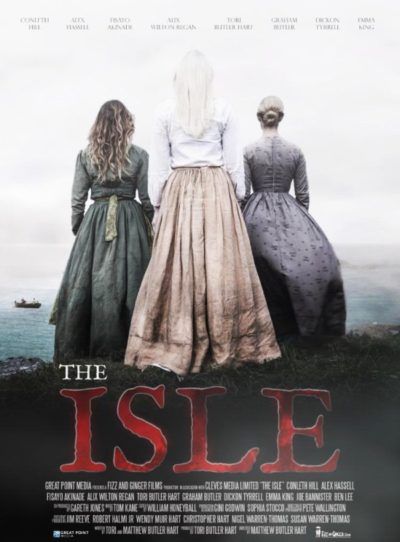 Unfortunately, none of it works particularly well in terms of a story. You get a good idea where it’s going to end up from that scene-setting, the film spoilering itself to a certain degree. There are no clear rules of engagement: wandering outside at night is strongly discouraged, yet the logic of why it should be the case is never explained. The period atmosphere is a bit ropey, and although Hill and Hassell are fine in the central roles, some of the supporting performances leave a lot to be desired. The script even resorts to the cliche of Gosling finding a previous resident’s diary, which is among the most lazy alternatives to exposition around. The entries are at the exact degree of vagueness necessary to the plot, when in reality, someone would just write “Help. Killer sirens.”

It does look pleasant, being well filmed and showcasing some nice scenery. You probably should enjoy it, since you get to see quite a lot as the characters wander around the island, for no particular purpose. Credit is awarded for actually filming these in Scotland, with the island of Eilean Shona on the West coast apparently the location. [According to Wikipedia, the isle was indeed largely abandoned around 1850, due to an outbreak of potato blight] Aside from giving me a possible future holiday destination, I cannot in all honesty say I got much out of this. As horror, it’s a small cup of mild salsa, and is not much better in terms of drama.