Sit down, you’re in for a shock.  ‘Seat 25‘ opens with a decently long narrated intro (Ashfield).  I bloody know!  When did you last experience one of those!?

Faye (Cooke) is obsessed with space and always has been.  Sadly her life is utterly mundane.  Beige.  Dreadfully dull.  Surrounded by people all swimming around and around in the same goldfish bowl day after day after day.  It’s unrelenting.

Trapped in a marriage she feels estranged from and lonely living, beset with a family who pay her scant regard, doing a job that is alien and alienating for her, and yet she stills seeks rainbows.

“We’re going to have a baby…” husband Jim (Banks) announces, having sensed and completely misunderstood her ennui, unilaterally deciding that he understands both cause and solution.  He should have said ‘try for a baby’, as with Faye on the pill such seems unlikely.

Enlivening their lives Elon Musk Michael Macmillan (Brennan) arrives on national TV to announce that in addition to the twenty-four carefully selected explorers destined to travel to Mars on his space-rocket, he will open seat 25 up for public application.  Each will be read by him and the final winner so selected.  Anyone can apply.  And Faye does, unbeknownst to all around her. 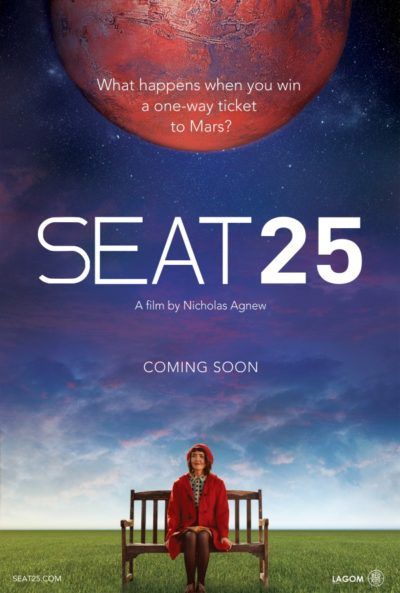 “Life has a way of trapping you.”

As will Mars.  For with the sudden reignition of its core, it is now protected from all communications or observation by its magnetic field, and as an atmosphere forms and temperatures rise, it may be that water is present again.  Whatever the outcome, any trip is into the unknown with little prospect of return or rescue.

And Faye is trapped.  Alone, submerged, stranded and surrounded.  In a life where everything is always about someone else.  Provincial.  Slow.  Insipid.  Petty.  Selfish.  Spiteful.  Sad.  Poignant.  Funny.  Kind.

“The total insignificance of everything.”

This story, this film, has sod-all to do with space exploration and sci-fi.  This is Faye’s journey to escape.  Her dream of leaving.  Realising a necessity.  Onwards, on to the next stage, the next phase of her life, reaching out, yearning, acutely aware of what doesn’t make her happy.  Accepting the need and opportunity to change, grasping the moment as it presents, despite the fear.

“The journey is nothing.  It is always the first step which is the hardest.”

Touching.  Inspiring.  Affirming.  Beautifully realised.  Cutely quirky, off balance, engagingly and compellingly so.  This film does quite a lot with not very much, and says much quite softly.

Confession time?  Well the constant piano music does get a little tiresome now and again.  Oh, and it’s not really an ‘A’ film, more like a very solid ‘C++’.  The reason for the ‘A’ is to maybe get you to read this review such that you might be intrigued, and then perhaps decide to watch it.  And who knows you might enjoy it, and like it as much as I did.

As for the acting, directing, cinematography et al?  It’s all more than good enough.  My final thought is that it could also make a very nice stage play.  Give it a go.  It’s not overly long.