I was expecting better, and the grade definitely reflects this. I really enjoyed the ludicrous excess of Hobbs & Shaw, while Atomic Blonde was flat-out incredible. This, in comparison, feels by the numbers, and not very innovative. The mark is also dragged down by a script which feels like it was cobbled together out of scraps from Quentin Tarantino’s waste-paper basket. It runs 126 minutes, and should have been about 100: very chatty. Oh, well-assembled and slick as hell, especially considering it cost a relatively small $90 million ($20m of which went to Pitt). However, it is no exaggeration to say that Accident Man: Hitman’s Holiday, which we watched the previous evening, was a better showcase of combat cinema, despite its budget probably not covering the cost of Brad’s hand-sanitizer on this production.

It takes place, almost exclusively, on a Japanese train going from Tokyo to Kyoto. On it are various groups of and individual assassins, battling for control of a suitcase stuffed with cash, and the son of notorious Japanese crime boss, the White Death. These include snatch-and-grab guy Ladybug (Pitt); double-act Tangerine (Henry) and Lemon (Taylor-Johnson – hard to remember him as Kick-Ass!); and the Prince (King), a teenage girl with a flair for deception. There are others, because this seems to rely on lobbing a new character in, in lieu of developing existing ones. The likes of Zazie Beetz’s Hornet get flushed away so quickly, you wonder why they bothered at all. It feels like a case where less could well have been more. 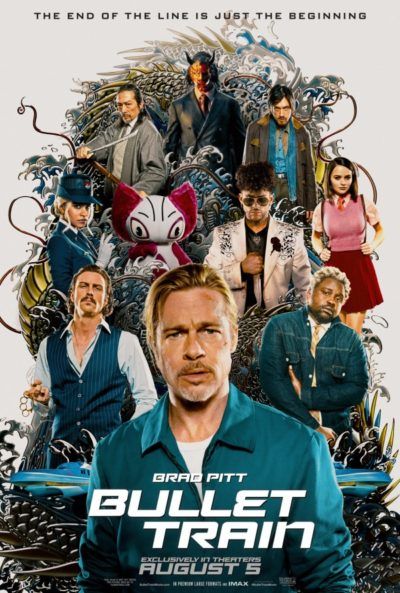 The comedic tone seems a bit at odds with material which definitely skews dark. I sense Leitch was perhaps going for a Guy Ritchie-esque approach, yet too often the delivery seems to fall flat. I was occasionally amused by Ladybug’s deadpan delivery of self-help aphorisms, but the “Thomas the Tank Engine” references quickly reached #DeadHorse territory. To be fair, his obsession is something present in the original Japanese novel (who knew Thomas was big in Japan?), but this kind of thing seemed to be used as a replacement for meaningful development. Lemon’s repeated reduction of people to train archetypes is relevant, since there’s a case to be made that Thomas had more well-rounded characters.

That said, I was never bored, thanks to the film possessing a brisk commitment to carnage, albeit largely by eschewing any connection to reality. The level of mayhem it depicts would be tolerable on the Saturday Special out of South Bermondsey, rather than Japan, yet law enforcement appears solely concerned with Ladybug not having his ticket. The film does work as a very nice commercial for the bullet train service, though I doubt the carriages are as Cinemascope wide as depicted top. It all adds up to create a distancing effect, largely nullifying any emotional context. I’m not sure the movie cares, appearing more concerned about showcasing its more or less significant cameos, e.g. Ryan Reynolds, Channing Tatum and Sandra Bullock.