The nineties called: they want their zombie movie back. This, I should stress, is not necessarily a criticism, so much as an observation. Over the past two decades, zombies have gone from being nearly forgotten, through being all-encompassing in pop culture, and then on to a weird place where anyone attempting the genre seems to feel it’s necessary to add a new spin. “They’re zombies…but they can love!” There’s no such affectation here, which is why the execution feels old-school. They are the straightforward re-animated dead, hungry for flesh. The only nod to new-wave zombies is they are sometimes quick on their feet. Only sometimes though.

It starts off a bit wobbly, with a rather unconvincing depiction of a military base. It’s basically a tent, with a number of soldiers therein who look like they’d struggle to pass basic training. They attempt to make up with this by saluting. So. Much. Saluting. You’d get a liver-destroying drinking game out of this, if you took a shot every time someone salutes. Things are just about held together during this spell by LaSardo as General Vasquez. His performance helps draw your focus away from such things, and sets the plot proper in motion. This involves dispatching a platoon of soldiers, led by Sgt. Hernandez (Watson), to hold a strategically important bridge. It’s a choke-point for the advancing zombie hordes, and if it can’t be held, needs to be destroyed. 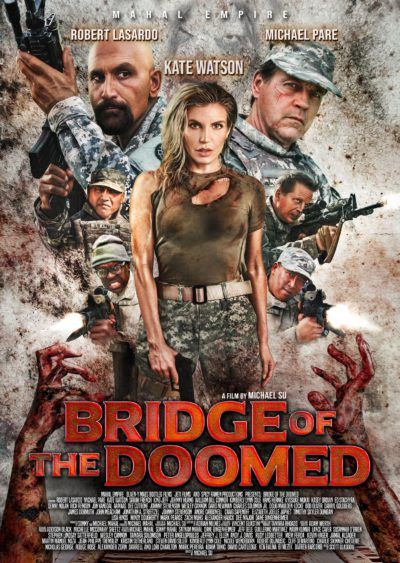 The film generally improves once it relocates, and the platoon discover the zombies are not the only problem they will have to face. Firstly, there’s an encampment of humans whose relationship with the army is fraught from the first encounter, which results in one of the civilians being shot dead. Secondly, there’s something living under the bridge. It’s not a zombie. It’s not an animal. But it is smart, quick-moving and, apparently, highly miffed. To be honest, I wanted to see rather more of this, and expected to, from the synopsis. It’s the main point of originality, bringing the film closer to Dog Soldiers territory. Exploring it in more depth would have been interesting – even if it meant more of the quite terrible CGI muzzle-flashes, a bit of a personal peeve, as is the occasionally excessively shaky camerawork.

I did like Watson, an officer perpetually forced to think on her feet, and handle as well as possible, situations for which she’s ill-equipped through no fault of her own. Matters aren’t helped by dissension in the ranks, not least the questionable behaviour of Private Shamrock (Rendon), who seems to regard the current circumstances as open season. These positive elements add interest to help make this a decent enough time-passer. You’re rarely more than about two minutes from something violent, and the practical gore is quite enthusiastic and plentiful. Naturally, it ends in an all-out assault on the bridge, and I’ll leave you with this spoiler: Michael Paré does eventually justify, at least vaguely, his position on the poster.

The film is out now, and available through most streaming services.