Between 1957 and 1976, the Hammer film company was THE producer of horror. At least 90% of their product was excellent, but in the last few years as the competition increased, they resorted to souping up their product with sex. Sometimes this worked well (“Vampire Circus”), sometimes it didn’t. “Lust for a Vampire” was easily the tackiest product they made, gleefully sacrificing their entire vampire mythos in exchange for some soft-porn.

It all begins quite promisingly and with no hint of what was to come. A standard Hammer peasant wench wandering through the woods is picked up by a mysterious figure in a cloak and taken, screaming, to a castle where her throat is slit and her blood used to resurrect a skeleton. The first cracks show here – it’s not Christopher Lee, instead it’s some blonde bimbo.

Switch to the village inn, where Richard Lestrange, a writer of dodgy novels is staying while on a research trip. The innkeeper warns him about Castle Karnstein, home of Carmilla Karnstein and family. They’re all dead now, but this doesn’t stop them from coming out, every 40 years or so, to munch on the local virgin girls. Mr. Lestrange laughs heartily and goes up to take a look. He is surrounded by menacing hooded figures – in a plot twist unworthy of Friday the 13th, they turn out to be pupils at a nearby girls’ school out with their history teacher, Giles Barton.

They all return to said school, carefully failing to remark on the fresh blood- stains covering the altar. The other girls are having PE, which consists of dressing up in scanty Greek type gowns and waving your limbs about to the sound of a harp. [The PE mistress is called Miss Playfair!] Lestrange offers his services as an English teacher and is rejected since there’s one on the way. However, he does meet the ‘Countess Herritzen’ and her niece, Mircalla (one of the most blatant anagrams ever devised, rivalling even ‘Johnny Alucard’ for naffness). 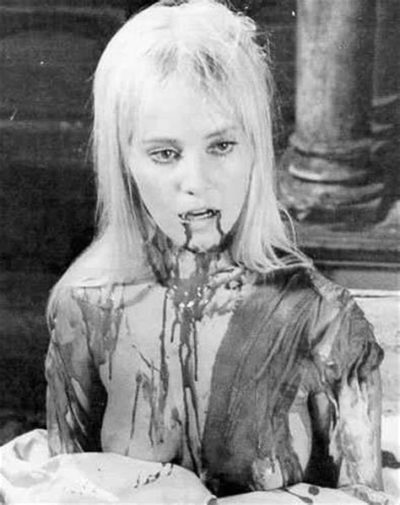 In a dormitory, where the girls are getting ready for bed (removing what little clothing they were wearing to start with), Mircalla has made friends with an American girl, Susan Perry, and gets her shoulders massaged. Her dress falls off and they arrange to go for a midnight swim.

Meanwhile, back at the inn, Lestrade meets the English teacher and tricks him into going to Vienna instead before going up to the school and taking over the post. Mircalla and Susan go for their swim (nude, naturally) and indulge in a bit of French kissing before Mircalla gets hungry… Lestrade sees her coming back and is so struck with lust he fails to ask why she’s been wandering the grounds at midnight dressed in her negligee. Susan’s disappearance is noticed, and covered up by the headmistress to prevent a scandal.

Giles Barton has discovered Mircalla’s murky past, thanks to her picture in a book, and he confronts her with the evidence (she has a lot of front to con, too). By happy chance, he turns out to be a student of Black Magic and begs to be her servant. She says “Fang you very much” [the editor wishes to disclaim absolutely any responsibility for the preceding pun] and nails him with her teeth. His body is discovered, fortunately while the Countess H. is visiting – her personal ‘physician’ certifies the death as a heart attack.

Miss Playfair reveals to Lestrade what’s been going on. While looking through Mr. Barton’s notes, he finds Mircalla’s picture – he also discovers the fang-marks on the teacher’s corpse. Undaunted, he also confronts Mircalla and shows a severe lack of originality in wanting to meet her at Castle Karnstein, in the middle of the night. They make love, even though Mircalla says it will kill him (accompanied by one of the all-time WORST movie songs – “Strange Love…” moans the singer). Guess what? For some unspecified reason, it doesn’t, and he survives with little damage apart from a couple of love-bites. 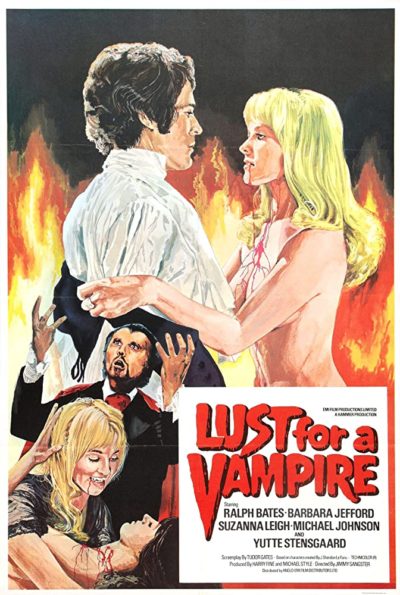 Miss Playfair plays fair and tells the police of the missing girl and dead teacher. Inspector Heinrich arrives, tells the headmistress to write to Susan’s father and has a nasty accident involving a well. Miss Playfair tells Lestrade her suspicions of Mircalla, unfortunately within the latter’s hearing; her attempted desanguination of the teacher is foiled only by the cross Miss Playfair wears. Mr Perry arrives, digs up his daughter’s coffin and finds it full of daughter, thanks to the Countess H. The fang marks are a bit of a give away, though…

In less time that it takes to say “Burn them!”, a rampaging peasant mob, led by a handy priest, has gathered, the castle is set on fire and Mircalla has the bad luck to be impaled on a burning beam that falls from the roof. Playfair and Lestrade live, we assume, happily ever after.

As a sexploitation film, it’s pretty good. Lots of cleavage, even if I’m sure school uniform in the 1830’s would have been more demure, plenty of blood and some great images. What makes this such an Incredibly Bad Film, then? History mainly. Forget all the things you thought you knew about vampires. Daylight? No – a schoolgirl who spends the day locked in the closet would be TOO suspicious even for this film. So daylight has no effect. What about water, as in “Dracula, Price of Darkness”? No, that’d get in the way of the swimming scene – out it goes, too. The plot is laden down with so much coincidence; luck, chance and fortune rule at every turn, enough to stretch anyone’s credibility. A perfect example: when Mr. Perry is discussing his daughter’s death in the village inn, his friend says “You don’t need a doctor, you need a…”; at that very moment, a priest arrives. Fortunate, huh? The hero isn’t your average hero either – lusting after school-girls is just not Hammer!

Hell, it’s fun. If nothing else, it’s a good reminder that even better film companies can make Bad Films – just don’t rely on it for anything other than a good time and some female flesh.