Amazing to think it’s now over 25 years since the original Mortal Kombat became arguably the first decent video-game movie. I still remember it fondly, for aspects like Christopher Lambert’s tongue in cheek performance, and of course, the epic slice of nineties techno which was the theme song. MOOORTALLL KOMBAAAAAATTT! But I think it succeeded largely through not taking itself too seriously. It was an adaptation of a shallow, beat ’em up. When Roger Ebert said, “Video games can never be art,” Exhibit A for the prosecution would probably have been Mortal Kombat and its descendants. The 1995 movie only just qualified as art, but that didn’t stop it from being a fun time. 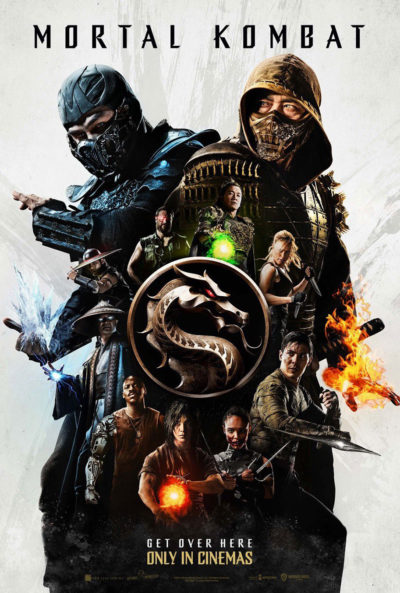 When the 2021 version lets go and lets rip – such as the scene where someone has their face sawn in half by an apparently very angry hat – it works. Because it’s these moments that capture the ludicrous excess which made both the game and the original movie successful. Yet even though this is rated R, in comparison to the predecessor’s PG-13 rating, it seems more restrained. [I just realized I have entirely forgotten about Mortal Kombat: Annihilation. Let’s come to a mutual agreement it never happened] The film here feels as if it wants to be taken seriously. Or, at least, as seriously as any  movie can be, where the enemies include a four-armed giant, who seems to have strayed in from Clash of the Titans.

The hero is fairly crap MMA fighter Cole Young (Tan), who gets selected as one of Earth’s champions, due to his ancestor having been considerably more bad-ass. Our realm had lost nine straight tournaments against Outworld, and one more would be game over for our planet. He, and other recruits like Sonya Blade (McNamee) have to tap into their inner powers, to take on the likes of Sub-zero (Taslim), who aren’t prepared to wait for the upcoming tourney. It’s all Very Serious. The only person who seems to be having fun is Kano (Josh Lawson), an Australian whose sardonic wisecracks will often save you the bother. The movie would have been better with him as the central character, instead of the blandly uninteresting Cole.

In many ways, it suffers from the same problem as Godzilla vs. Kong, in that it has too high expectations for what the audience wants – and it;s not relationships. When there is inventive carnage happening, it’s fine, and is enjoyable on that, expected, level. [Though they should have fully embraced the rating. It’s probably rated R more for language than graphic violence] However, the film thinks we should care about, for example, Cole’s family. But it gives us no reason to do so, beyond simply dropping them into peril. To put it into video-game terms, the ratio of cut scenes to playable levels is skewed too heavily toward the former. If you find yourself wishing there was a “skip” button for those, you are not alone.