Come for the spouts of lava, stay for Herzog being bemused by life in North Korea. It’s kinda like that. We’ve been on a bit of a volcano binge of late, since the eruption of the Fagradalsfjall one last month. It became a bit of a tourist attraction, due to its relative proximity to the Icelandic capital, Reykjavik, about 25 miles away. So there have been live webcams, eye witness reports and even a drone flight over and around the eruption. It is, admittedly, fairly chill as volcanic events go, with lava from which a gentle amble would be sufficient to escape. Still fun to watch though, and it got us inspired to watch Herzog’s documentary on the topic. 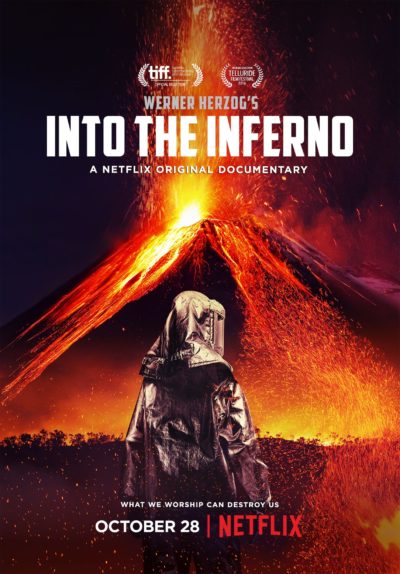 Well, loosely on the topic. Herzog being Herzog – and as in Fireball: Visitors from Darker Worlds, it’s less “about” the subject matter, than uses it as a jumping off point to look at the human stories which surround it. That said, the footage of explosions, flowing lava and bubbling pools of molten magma is epic, even if you sometimes feel the need of a banana for scale. Peak awe-inspiring is probably shots of a pyroclastic flow (superheated gas and debris) from Japan’s Mount Unzen in 1991, which killed forty-three people. Even Werner is less bitter and sarcastic than normal, though towards the end, does proclaim, “It is a fire that wants to burst forth, and it could not care less about what we are doing up here. This boiling mass is just monumentally indifferent to scurrying roaches, retarded reptiles and vapid humans alike.”

Which is perhaps the point. Volcanoes are a true force of nature, over which mankind has absolutely no control. Like a hurricane, they cannot be reasoned with. They don’t care about your feelings. More variably successful is the tangential content, beginning when he first met vulcanologist Oppenheimer, while filming Encounters at the End of the World in Antarctica, ten years earlier. This spans the globe, from there to the Pacific Islands, Iceland, Ethiopia and North Korea, meeting people with connections to their local volcanoes. I could probably have done with rather less footage of Oppenheimer crawling about the ground in Africa, looking for ancient hominid fossils. It’s not very exciting, even when you realize that grey stone-like fragment is a piece of cranium.

On the other hand, there’s North Korea, for what is supposedly a scientific expedition. Except it’s pure political theatre, from the moment on the side of a mountain where a whole battalion of  identically-clad students “spontaneously” show up, and burst into patriotic song and enthusiastic arm-swinging (top). To quote Herzog, “Everything we saw was an act of presentation, and we went for it. There is no other way to see this enigmatic country other than how it wants to present itself.” Any presentation about North Korea needs to be totally dead-pan and serious, making Herzog perfect for the topic in much the same way Laibach were. I would have no hesitation about sitting through an entire feature of Werner Herzog Goes to North Korea.