Hang on… At the end of The Debt Collector (spoilers, obvs), things didn’t exactly look great for everyone favourite pair of unlicensed repo men. Sue (Mandylor) had taken multiple bullets to the torso and had been written off by the movie, while French (Adkins) was slumped in the car, doing a similar impression of a well-used sieve. I guess no-one, least of all the film-makers, expected this to do well enough to justify a sequel. Indeed, there’s a credible argument that, by bringing them back from the dead, with little damage apparent, this weakens the narrative of the first film by removing the element of their heroic sacrifice. 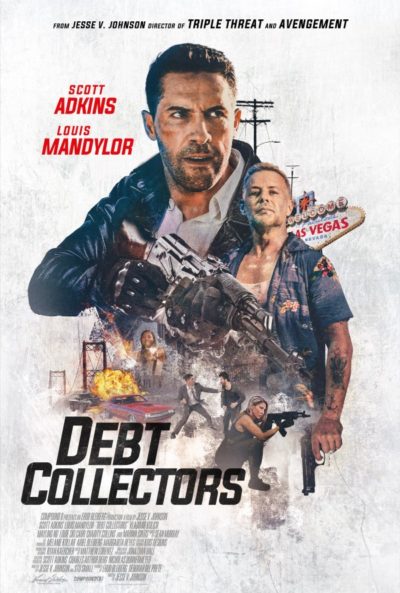 Yet, here we are: French is now working as a bouncer, and Stu is back in the debt-collecting game, with only a few sentences to explain both their miraculous returns to life. That done, the duo are back in action, collecting three debts for old boss, Tommy (Kulich, though Chris swears it’s a different actor). Yet, as before, it’s not so simple, with the job being a ruse to lure them in, for their actions at the end of the predecessor. It’s all considerably less interesting this time around. There’s no particular sense of discovery, in terms of the characters. In the original, there was sound footing for why Sue was a walking action-movie cliché. Here, he just exists, and by the end, you’d be hard pushed to say he has developed as a character. Valuable life-lessons learned: uh, don’t hang around the same territory after you’ve blown away a serious gangster, narrowly escaping death in the process?

French has, at least, moved on somewhat, though his undeniable talents seem at odds with his status. Just as in the original, where you’d think a teacher like him would have students queuing out the door, you’d expect him to be in high demand in the personal protection industry, not brawling with drunks in the diviest of dive-bars, after an argument about the Revolutionary War. In place of any emotive depth, we get conversations about penis size, which are neither amusing nor comfortable. The most impressive thing here is probably Mandylor’s fight skills; he does much more, and considering he’s in his mid-fifties, acquits himself very well. Notable is a back-alley brawl with his partner, very clearly inspired by They Live in its ceaselessness.

However, it’s a rare sequence where this lives up to what we’ve seen before. The end, in particular, degenerates into an utterly forgettable bullet-riddled shootout, indistinguishable from a million other movies, and unforgivably squandering the hand-to-hand talents of Adkins. On its own, this would probably skate by, mainly on the still solid way Stu and French interact with each other. However, having watched this back-to-back with The Debt Collector, the difference between the two is palpable. I even found myself missing the bizarre monochrome stock footage of cows. And that’s a sentence I don’t think I’ll ever write again.