If ever I become a billionaire, I think I want to hire Herzog to follow me around all day, providing a sardonic running commentary on my life. He’d probably be down for it, given his knack of taking relatively mundane topics, and finding the beauty and meaning hidden in them. In this case, it’s rocks from space, as beloved by disaster porn movies, and Deep Impact gets an approving shout-out from Herzog. But there has been more to them over the course of human history. These visitors have been imbued with special significance: for example one commentator describes a 1492 meteorite, as “an e-mail sent from God to the subjects of Maximilian to tell them that his rule was legitimate”. There’s an example later of one which crashed through the roof of a kennel, and still has dog-hair on it. What the kennel’s resident thought is not recorded. 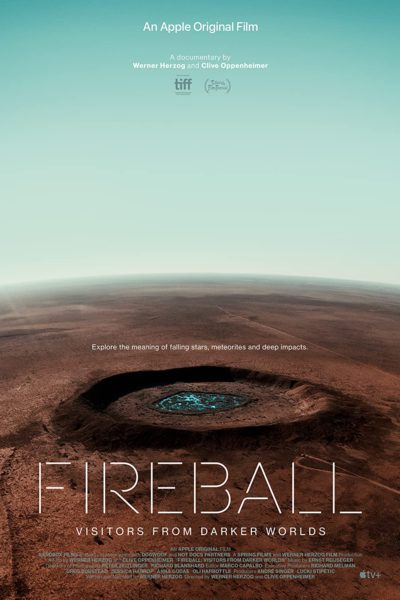 The film provides a mix of the secular and spiritual, and globe-hops merrily, with Oppenheimer the main face in front of the camera. In Norway, we meet jazz guitarist Kihle, who has turned a sports arena roof into a collecting trap for micrometeorites, a hundred tons of which fall to earth every day. But in Italy, we also meet Brother Guy Consolmagno, a Jesuit planetary scientist, who says “You don’t want to do science if you don’t have that sense of awe, that sense of wonder. You can’t believe in a creator god without experiencing creation. Otherwise what’s the point of believing?’ That’s perhaps rather kinder than Herzog, who narrates with his usual sense of acerbic distaste. This never becomes clearer than when visiting the “unpronounceable” Mexican town which is the epicenter for the meteor strike that killed off the dinosaurs:

Nothing out here is reminiscent of it. Only leaden boredom weighs upon everything. Chicxulub is a beach resort so godforsaken you want to cry. The dogs here, like all dogs on this planet, are just too dim-witted to understand that three-quarters of all species were extinguished by the event that took place right here. The dinosaurs have only survived in a local museum. Their eyes were made by humans. They recognize nothing. Only their footprints are authentic, but they show they were ambling along, not fleeing. They were oblivious to the sudden death of everything.

There are times when the connection to meteorites becomes rather tenuous. I’m not sure it merits linking to the Mexican Day of the Dead celebration – I guess, on the basis of the extinction event caused by the Chicxulub incident? It does also struggle occasionally to balance the two elements of faith and science. Still, it’s fun to see things like a Korean researcher thrashing about in the Antarctic snow, in sheer joy at having found a specimen, or Oppenheimer smelling the scent of meteorites in a lab here in Arizona [you’d think he might have popped upstate to see Meteor Crater while he was here?]. Though I dunno about inhaling them. It seems risky, and I vaguely recall a horror film which began along similar lines. Now, that’d certainly give Herzog something to be acerbic about.