Considering this almost became an extremely rare “did not finish”, the above grade has to be considered something of a triumph. On the one hand, this is hokey garbage of the highest order, and when I tell you the plot, you’ll wonder why I even bothered. Rather than be shipped off to relatives for the summer, teen Sophie Walker (Keeth) agrees to go work at Camp Arrowhead, along with her pal, April (Regullano). There’s she’s victimized by rich bitch camper, Devin Dupree (Lukasiak), but bonds with another attendee, both having a dead parent. Sophie discovers a talent for archery, which lets her become part of Devin’s crowd, as they take on a rival camp, learn valuable lessons about life and Sophie comes to term with the loss of her mother. 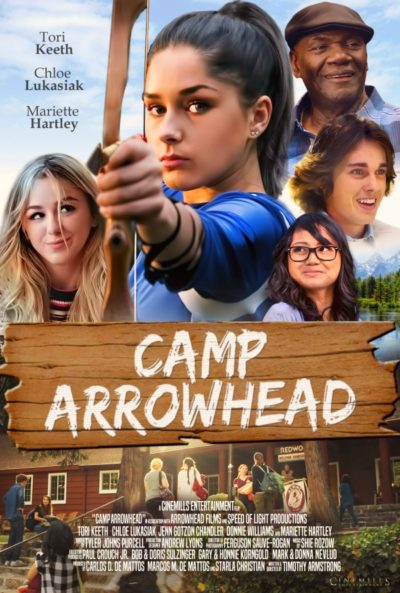 Really, what the fuck? Let’s be honest, given the poster, I was hoping for hot teenage arrow through the head action, and despite the picture at top, the film fails to deliver there. I think it reached the depths during the camp talent contest, at which point, I clicked the off button. But I eventually persevered, and the film turned. It has a sincerity which is kinda endearing, but what really worked was Williams’s performance as “Percy”. An eccentric individual living near the camp, he teaches April the finer points of archery, while digging holes round his property looking for some long-forgotten item. The character only gets weirder from there. But somehow, it works, and his quiet dignity almost single-handedly salvaged the film, when all seemed lost.

Williams has had a pretty interesting career path. A former marine, he had a bit part in Enter the Dragon as Jim Kelly’s teacher, and is a 10th degree black belt. But he’s also a preacher, and without spoilering it, this probably proves more relevant to his role as Percy. When he speaks, you find yourself listening: as April puts it, “I feel strangely at peace when I’m around that dude,” and she’s not wrong. While I’m not the least bit religious, the creed he espouses is simply one of pure, unconditional love. It’s oddly affecting, and I’ll admit to, indeed, having been far more impacted by his last scene – and, consequently, the resolution of Sophie’s arc with her late mother – than I’d have anticipated during the musical numbers.

Admittedly, you either buy into that or you don’t; and if not, this is likely a hopelessly lost cause. Yet, I found something heartwarming about it, and this would make a good double-bill alongside Date With an Angel. They’re both films that are and, at the same time, aren’t deeply religious. This isn’t as good, to be sure (Emmanuelle Beart + Phoebe Cates > Keith + Lukasiak). However, for a film which came within a heartbeat of getting DNF’d, to end up triggering… what I’m going to call a mild to moderate allergic eye reaction? Well played.