Popular wisdom had Hammer declining as they went into the seventies. But, if you can argue about the quality, they certainly kept putting out the product. 1971, indeed, was one of their busiest years ever, with eight features being released theatrically in the UK. [Though their biggest hit is outside the scope of this project – comedy adaptation On the Buses, which took more money in Britain than Diamonds are Forever] Their first film of the year proved a problem child, with a difficult production and has been largely derided since – not least by me! While my vitriol has probably mellowed over the 30+ years since that piece was written, this is very definitely the worst of Hammer’s Karnstein trilogy.

Matters certainly weren’t helped by losing its director and stars before shooting began. Terence Fisher had agrees to direct but broke his leg deep in pre-production, and was replaced by Sangster. Tudor Gates’s script had written the role of Giles Barton for Peter Cushing; he withdrew to take care of his sick wife, Helen (who, sadly, died on January 14th, 1971 – Cushing was never the same after her death). Ingrid Pitt was asked to return from The Vampire Lovers, but declined. Some reports have her unhappy with the script. But that may be rationalization after the fact, and she might just have already signed to rivals Amicus for The House That Dripped Blood. In any case, the studio went with Stensgaard, a Danish actress with minor screen experience, including a couple of Carry On films. Not for the first time, Hammer’s photogenic starlet here would have her lines dubbed. 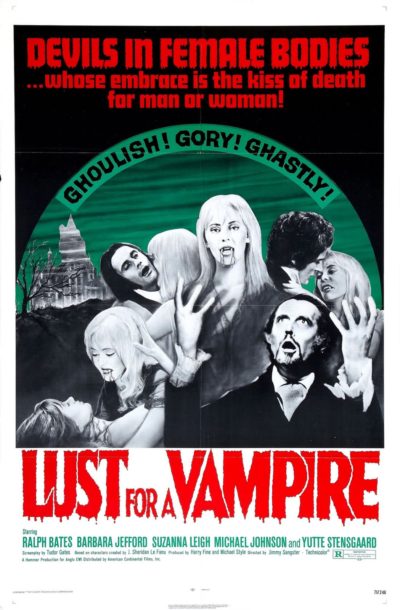 To be fair, she wasn’t the only one. Count Karnstein was played by Mike Raven. Despite his day job being as a radio DJ, who was part of Radio 1’s initial roster, his voice was also deemed sub-standard, and replaced by renowned character actor Valentine Dyall. Even more embarrassingly, during the ceremony which brings Carmilla Karnstein (Stensgaard) back from the grave, the film obviously splices in close-ups of Christopher Lee’s red eyes, replacing Raven’s. While Raven certainly seems to be trying to look like Lee, this may be the first time someone has had their eyes dubbed… [Raven’s Wikipedia page describes him as “a British radio disc jockey, actor, sculptor, sheep farmer, writer, TV presenter and producer, ballet dancer, flamenco guitarist and photographer,” which certainly suggests a full life]

The problems start early on, with an opening scene in which a well-cleavaged wench wanders off into the woods to become a blood bank for Carmilla. To paraphrase Chris, “They hired someone who can’t say her lines. Nice tits though.” Yep, 45 seconds in, and the snark must flow. There’s then the resurrection. It doesn’t actually include one of the most famous shots in Hammer history, which was only a publicity still. But it’s still fairly salacious. By the time we reach the all girls’ finishing school, which apparently features classes in advanced “Flouncing around the garden in flimsy robes,” I could positively hear Chris’s eyes rolling, over on the sofa. And that was before got to the random topless schoolgirls. I swear, I was looking over my shoulder and wonder when To Catch A Predator was going to show up.

Not helping matters, the actor playing the film’s hero, nomadic occult novelist and part-time English teacher Richard LeStrange (Michael Johnson), was born in 1939. This makes his lusting after these supposed teenagers, feel like an unwanted hangover from the seventies, alongside Gary Glitter and Jimmy Savile. Admittedly, they’re fauxnagers, e.g. Stengaard was 24, and original choice Pitt would have been well into her thirties hereself. But it’s still a concept that seems more creepy than erotic, in a way Lovers managed to avoid. Bates is actually a few years younger than Johnson, yet his portrayal of fellow teacher Barton, plays considerably older – which you would expect, since as mentioned above, the role was written for Cushing, then in his late fifties. Seeing how awesome Peter was in the subsequent Twins of Evil, might he have been able to salvage this? 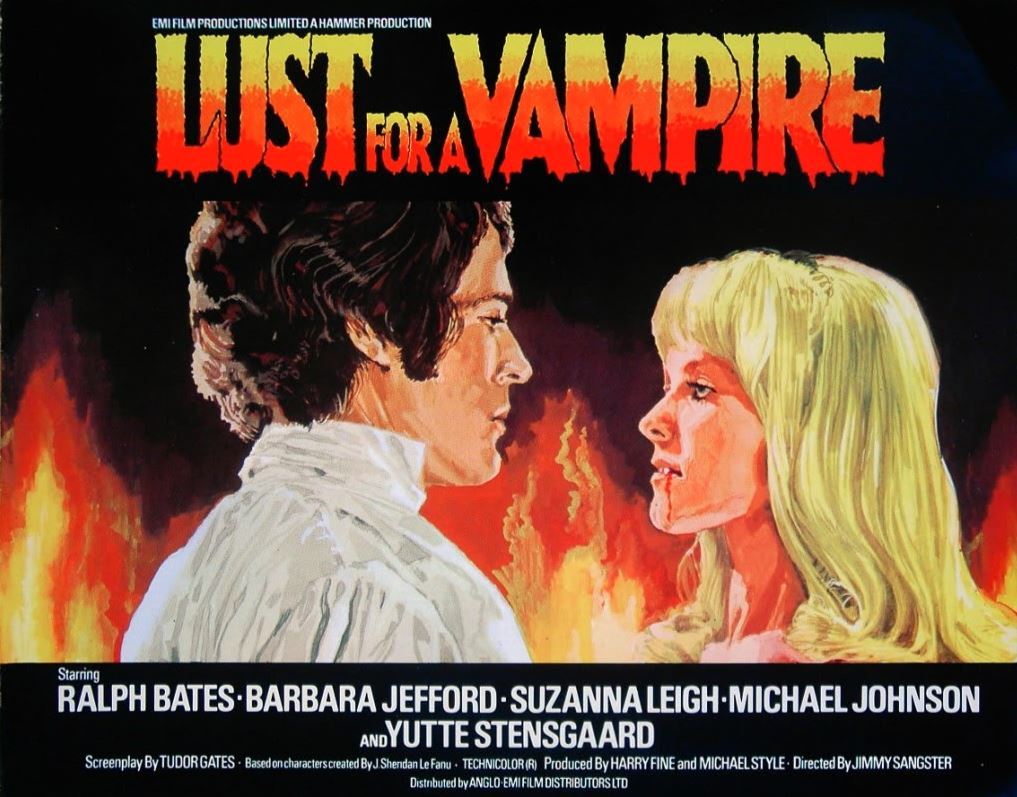 I can see for what Sangster was aiming. A Gothic romance, depicting the obsessive love LeStrange has for Carmilla – despite the obviously doomed nature of it, apparent from the fate of the other guy who declares his undying devotion to her. Though as the hero, Richard manages to avoid becoming a midnight snack. Instead, we get what’s perhaps the most embarrassing sequence in Hammer history, which derails the film entirely. I speak, of course, of the love scene between Richard and Carmilla, played out over the naffest of naff pop songs, Strange Love. Not to be confused with Strangelove, it’s sung by the otherwise obscurist “Tracy” – no last name. It was released as the B-side of her even more unknown Rock Me in the Cradle (of Your Loving Arms). The main impact was to have me yelling “STRAAAAAANGE LOOOOOOVVVVE!” at random moments for the rest of the film.

Allegedly, Sangster was unaware of the song’s addition, which came through the producers. When he finally saw it, he tried to hide under his cinema seat. I can’t blame him – though it’s not as if the other 91 minutes are great shakes. Bates, in particular, regretted having anything do with it, and called Lust “one of the worst films ever made”. While there’s clear hyperbole involved, I can see his point. He, and Leigh as gym mistress Janet Playfair (she was another late addition, having begged Michael Carreras for a part to get her out of financial troubles) do what they can, The movie fails due to terrible  performances from Johnson and Stensgaard. Neither would star in any more feature films, and it’s easy to see why, based on the flatness of their portrayals here. Even the dubbing can’t help Stensgaard. And am I the only person who doesn’t actually find her flat, almost pie-like face attractive?