In the wake of Witchfinder General came a slew of similarly themed roughies. The most infamous is likely this, which was based on a script by Hoven – confusingly, originally titled The Witch-Hunter Dr Dracula. He wanted to star and direct, but his backers preferred a British director, bringing in Armstrong, a friend of Michael Reeves, the man behind Witchfinder, and who delivered a similar sensibility. Hoven remained a producer, so was on set throughout and still demanded his vision of the film. This made for an interesting shoot. For example, there was reportedly a two-hour argument between him and Armstrong over whether Kier should be standing or sitting in a scene. Armstrong ended up getting fired, and Hoven took over. Given all this, it seems a miracle the end result is coherent, never mind as good as it is.

Its infamy is largely based on the copious and intense torture sequences, coupled with a brilliant marketing campaign by US distributors Hallmark, where it proved more successful than Witchfinder. They called it “Positively the most horrifying film ever made” and said it was “Rated V for Violence” (a claim they had to withdraw after the MPAA objected). Sick bags were given free to the audience upon admission, and it seems the BBFC could perhaps have used some of those. On its initial submission, a certificate was refused, with cuts to that end described as “useless”. Board chairman Lord Trevelyan called it “A filthy and disgusting film, and a clear candidate for total rejection”. But the distributors persevered, and it was finally passed… with twenty-four minutes removed. It took over forty years and multiple attempts before an unedited version was permitted, cuts being required up until 2013.

It’s supposed to be 18th-century Austria, though the main antagonist is the very British sounding Lord Cumberland (Lom). That name will be familiar to history fans, as commander of the English forces at the Battle of Culloden in 1746. Interestingly, he became known as “Butcher” Cumberland for his brutality post-battle. Here, he’s an overseer of the anti-witch process, arriving in s town where Albino (Nalder) has been operating in a problematic way as witchfinder for two years.  In advance of Cumberland’s arrival, his witchfinder Count Christian von Meruh (Kier) shows up, quickly antagonizing Albino with an insistence on due process, but also falling for local barmaid, Vanessa (Katarina). What better way for Albino to get revenge than have Vanessa denounced as a servant of Satan?

Initially, both von Meruh and Cumberland seem almost sympathetic, relative to Albino. However, it becomes clear their problem with Albino is not that he has been executing the local population. It’s that he has been doing so without the right paperwork. There needs to be indictments and signed confessions for that sort of thing. Yet, as the film progresses, von Meruh becomes increasingly disenchanted with the entire process, realizing that it’s often used for non-spiritual reasons. In the most obvious example, after a local Baron refused to cede his territory permanently to the church, he is proclaimed a sorcerer, because if executed as a heretic, the church can seize his property.

Again, this financial motive is not historically inaccurate. In the 14th century, King Philip IV of France accused the Knights Templar of blasphemous practices, one theory being it allowed him to annul his debts to them. Also, the film is reasonably equal opportunity in terms of its torture, with the Baron getting off no lighter than the women. However, there’s also the sexual abuse, most notably an extended if non-explicit rape by Cumberland of one suspect who takes his fancy. Notably, all the female suspects appear to be young and attractive, not exactly the archetypal “old crones”. This is still an exploitation movie, after all, and certain standards need to be maintained.

Eventually, the locals have had enough, though it seems all it takes is a quick speech by Vanessa to result in the forming of a mob with pitch-forks [it’s daylight, and so torches would be superfluous…]. They storm the castle, and in the light of recent events, I was amused to see the mob, despite their righteous and justified anger, end up looting the place. Such is the way of all “social justice” movements, it appears. In an early example of #LeopardsAteMyFace, Vanessa’s fire-brand rhetoric backfires, as the mob turn their anger on her boyfriend, the at least relatively innocent von Meruh, and use his own torture implements to kill him. It’s in line with the downbeat ending of Witchfinder, though the highest-ranked perpetrator, Lord Cumberland, climbs out a window and escapes justice. 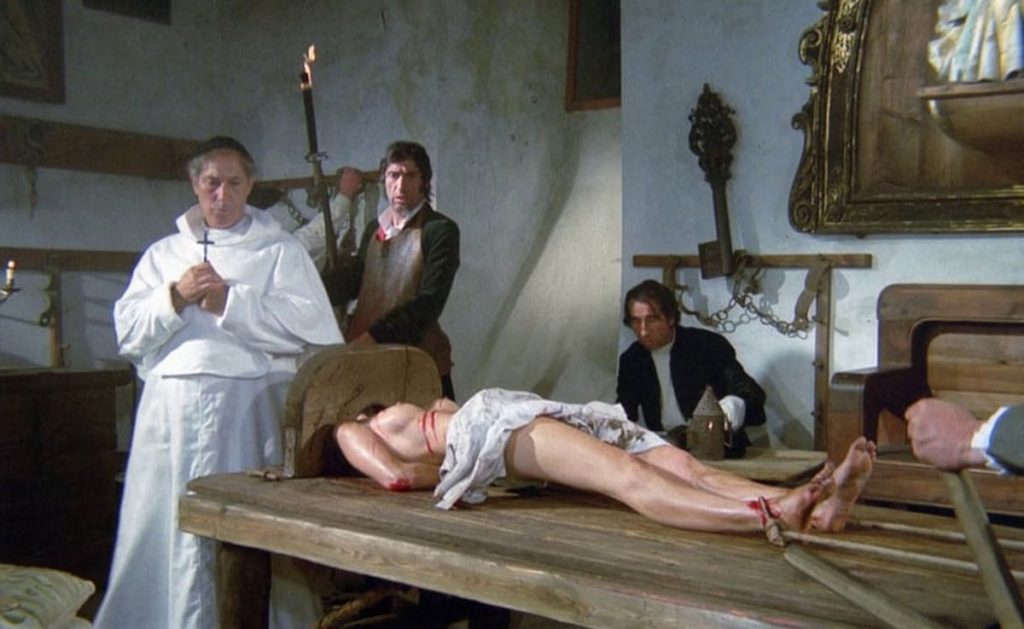 I have to say, this was considerably more polished than I expected. You can’t knock the production values, not least for shooting in a real schloss. Moosham Castle, near Salzburg, had actually been the hub for the Zaubererjackl witch trials, which took between 1675–1690. They led to the execution of 139 people, mostly men and almost all beggars, some as young as ten years old. But the rest of the film avoids looking cheap as well. When it comes to the torture sequences, the effects are generally simple but effective. The scene where a victim has her tongue torn out genuinely provoked an exclamation from me – mostly, I think, due to the little root attachment sticking out the back. Not sure how anatomically accurate it might be; it certainly looks appropriately gross!

However, what I think makes the film work are the performances. We may not quite be at the level of The Devils, a film which perhaps owes Mark a nod of gratitude in some aspects. However, Lom, Kier and Nalder are all thoroughly convincing, the last-named’s real facial scars fitting his character perfectly. In terms of overall quality, it’s certainly on a par with Hammer: indeed, a fun game is to recast this using Hammer actors. Perhaps Christopher Lee as Lord Cumberland, and Ralph Bates or Oliver Reed as von Meruh, with Kate O’Mara as Vanessa? While only a borderline “video nasty” (a Section 3 listing, rather than Section 2), it certainly should be considered among the upper tier, as far as merit is concerned.