Arguably among the most notorious British films ever made, its strength is not particularly in its outrageousness. Though that certainly pulls people in, I think it is other aspects which will stick in my mind, more than naughty nuns doing obscene things. These days, if you want that kind of thing (and I’m not going to judge you for it), the Internet will be happy to deliver content that would make even Russell blush. But Reed’s blistering portrayal of 17th-century priest, Father Grandier? That kind of performance is something you won’t find in your everyday incognito tab. And he’s not alone. The rest of the cast are almost as good – even Murray Melvin, who has to endure what is surely among the worst haircuts in cinematic history. It’s so bad, it borders on the hypnotic. 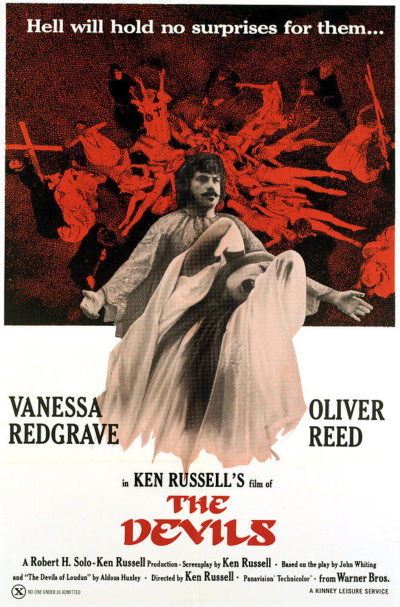 Despite being set close to 400 years ago, the story feels remarkably relevant [coughKavanaughcough]. Grandier is the popular preacher in charge of the walled French city of Loudon. While the city enjoys the favour of King Louis XIII, its independence poses a threat to those in power, particularly Cardinal Richelieu. He sends the Baron de Laubardemont (Sutton) to test down the walls. When stopped by Grandier, a plot is hatched to destroy the priest’s reputation instead. This exploits his disdain for celibacy and the carnal feelings of local nun Sister Jeanne des Anges (Redgrave) for Grandier, as well as coercing her colleagues into an outbreak of demonic possession that can be blamed on him. And if Grandier won’t confess, torture is a perfectly viable solution. It all makes for a thoughtful yet highly-savage indictment of how beliefs can be used as a tool, to manipulate both people and events for political purposes. In this light, it is certainly relevant that Russell had been a relatively late convert to Catholicism. But by the time this was made, he had come out the other side and become lapsed.

Beyond the slew of great performances, in roles big and small [a particular shout-out to Michael Gothard as Father Pierre Barre, who looks like a Witchfinder version of Thomas Dolby], the look of the film is equally impressive. Future director Derek Jarman designed the sets, and they possess a brutalist strength which almost makes them a character in their own right. It does take a bit of time to get going: we don’t need an interpretive dance number featuring Louis XIII re-enacting the birth of Venus, for instance. But from the moment the Baron and his monstrous machines show up in Loudon, it’s a powerful work. The scene where Sister Jeanne and the rest of the nuns lose it, culminating in the “Rape of Christ”, may be infamous. Certainly, for sheer volume of pubic hair, it’s may never be surpassed. But I think I probably prefer to remember Grandier’s Joan-of-Arc-like refusal to compromise his morality for the sake of expediency, instead proclaiming his opposition: “If your city is destroyed, your freedom is destroyed also. If you would remain free men, fight. Fight them or become their slaves!”