I kinda agonized over whether or not to check the “comedy” box for this, since I’m not sure how much of the humour here is intentional. Certainly, we did laugh at this on multiple occasions. But it’s probably true that this was more often at the film, than with it. Our story begins in World War II, when the Nazis hijack a scientist’s research into re-animation. Fast-forward to the present day, and Klaus (Jeff Kirkendall), a German scientist whose accent sometimes fails to make it through an entire sentence, is continuing the work. He has already succeeded in sewing together a mega-shark, from bits and pieces of multiple species. Now, he will transplant in the brain from those Nazi experiments. What could possibly go wrong? 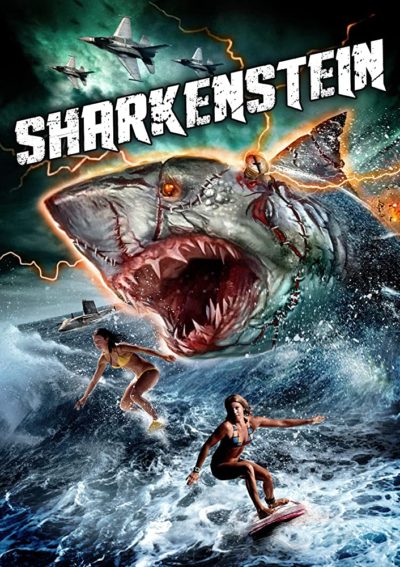 Into this setting come Madge (Volkova), Duke (Van Sant) and Coop (Himmelberger), three friends set for a day of boating. After their craft breaks down, they swim for a nearby island. Of course, this turns out to be home to Klaus’s seaside laboratory, and they are coerced into helping. Just as in the Mary Shelley classic, control of the monster is lost. Not in the book: a shark getting struck by lightning, and consequently transforming into a land-roaming creature, eating cows. There is, however, a mob of villagers, albeit one bearing firearms, rather than the usual pitchforks and torches. This is when the film is at its “best” (quotes used advisedly), riffing on the usual story tropes, and dropping deadpan references to other entries – for example, the line of dialogue, “Sharkenstein must be destroyed!”, a nod to a Hammer franchise entry.

The cover does not quite match the reality, naturally [trigger warning: shark rape], and a lot of this is woefully terrible. The final stage of the creature, which I believe was provided by veteran stop-motion guru, Brett Piper, does have a cheesy Velocipastor-like charm. At least, when compared to the rest of the effects, which are just sloppily amateur. The lack of effort which has gone into them feels obvious, and it’s a failing. Ed Wood’s films may not have been good, but they clearly had that effort, and it was part of their appeal. Wood may have been short of both talent and resources; however, he was still trying to make the best film he could. I’m not certain you can say the same here.

Perhaps the key question is, how much of the wretched awfulness is intentional? Some surely is, such as the “college-age” protagonists, at least one of whom is nearer retirement than graduation. But a suspiciously high amount just seems like poor film-making, such as people who supposedly climb out of the ocean, yet are entirely dry. Or hold conversations underwater while wearing scuba equipment. If you’re going to parody bad movies, rather than just make them, there’s an argument that you first need to demonstrate a certain degree of competence yourself. That’s an area where this struggles.