The Nordic noir genre is notable for being chilly – the very opposite of the “cozy mystery.” This takes the concept to an extreme, being positively glacial. Not so much in pace – though this is definitely a slow-burn – as in its emotional coldness. There is very little love, affection or warmth to be found here. There are, however, some stunning Norwegian landscapes. While the opening credits were still rolling, we were Googling “house prices in Fjærland”, the town where this was set. It begins with Andrea (Jørgensen) showing up at a local hotel,  introducing herself as a travel writer. She’s there for a feature on its owner, Morten (Winther). But it soon becomes clear, likely from the moment we see the Psycho knife in her handbag, that she’s not who she seems. The title of the film might just be a hint as to her true intentions. 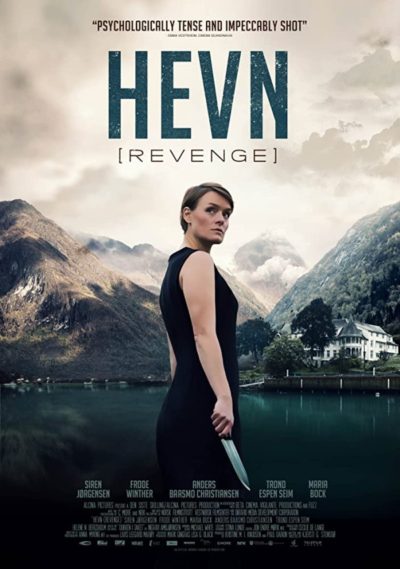 This is not even a whodunnit. For we quickly learn Morten had molested Andrea’s younger sister, an incident which led to her suicide. From that point, the ending is close to inevitable, providing Andrea’s wobbly alter ego can stand up to increasing scrutiny by the residents. It’s more a question of what form the revenge will take, and the details of how things will unfold. For instance, will the specific mention of how deep the local water is, be significant later? Turns out Andrea doesn’t really need to try too hard to bring down Morten’s life. A flirty text or two, supposedly from the teenage daughter of a friend, and the process begins – again, with the relentless unstoppability of a glacier. He’s not a very nice person. And almost every other person in the small settlement is either a victim, or has turned a blind eye to the evidence of Morten’s behaviour, such as his wife, Nina (Bock). Initially, Andrea looks to give Nina a way out. Yet, despite their shared canoeing trips, the spouse appears almost complicit. Denial isn’t just a river in Egypt. It also appears to be a fjord in Norway.

There is something almost Lynchian about the ugly moral decay which is lurking just beneath the surface of this beautiful countryside. And Andrea is by no means innocent, Her actions deliberately put a teen girl directly in the sights of the man who molested her sister – a dubious ethical choice. She also cares little for the ripple effect that her actions will have, such as on any other victims. Andrea has her mission, and despite occasional qualms, will see it through, regardless of the consequences. Yet the way this ends indicates she is perhaps prepared to step back from that moral abyss. However, there is a less charitable interpretation: that she’s delegating the dirty work to others, and letting them soil their hands in her place. It’s an interesting contrast to the recent French film of the same name, with the brutality here almost all on the emotional level, rather than the physical.