If one purpose of cinema is to show us things we haven’t seen before… consider that box checked off for Snatchers. In pen. Here, we get a newborn popping out of its mother with such velocity, as to blow the head of the attending physician, clean off. Its success was only compounded in the subsequent use by one character to describe the incident, of the word, “vag-cannon”. That’s a soft g. At this point, the film could have shown me paint drying for the next hour, and I’d still have been satisfied. It doesn’t. And if nor does it ever quite match this level of insanity, I’m not complaining. 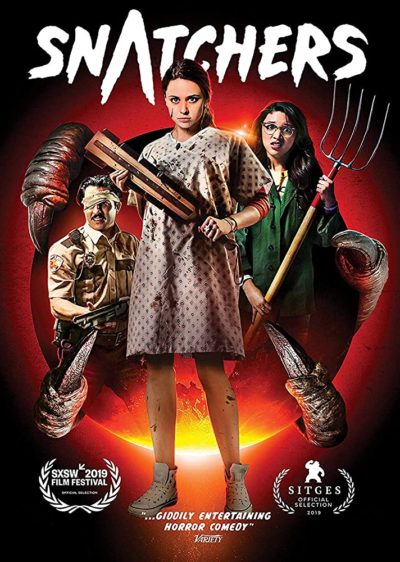 Sara (Nepi) finally gives in and has sex for the first time with her boyfriend, Skylar (Fryberger) – he has recently returned from Mexico – and gets knocked-up. Except, not a normal pregnancy: she finds herself nine months gone when she wakes up the next morning. A trip to Planned Parenthood doesn’t end well – as in the aforementioned vag-cannon. Sara gives birth to one weird alien, which proves capable of parasitically controlling host bodies, and there seems to be another bun in her oven, resisting all attempts to flush it out. With the help of long-suffering friend Hayley (Elyse) and mom Kate (Nolan), she has to figure out what’s going on. Could it be… aliens? Their path naturally leads to the biggest party in the school year, which represents a massive potential source of hosts for the hungry extraterrestrials, and where a horny Skyler is looking for further pleasures of the flesh.

This is the kind of film which takes full advantage of being small-scale and independent. Because there’s a lot of stuff here which would never make it through a major studio, and that’s when this is at its best. The script gleefully takes aim at sacred cows from abortion to immigration, and never hangs around any one topic for too long. Yet it remains a traditional horror flick at its core, a not-so subtle warning about the dangers of unprotected sex for teenagers. As such, it’s surprisingly conservative in morality. I’m even prepared to forgive this for faking being set in Arizona. [The fictional city of “Madre Vista, AZ” appears to have been played by Utah, or possibly New Mexico]

It does run out of steam down the stretch. This makes some sense, when you learn it was originally intended as a multi-series show. But after subsequent seasons fell through with the collapse of the streaming platform on which it was being broadcast, the decision was made to convert it into a feature. You can almost see the point at which that happens, with the film coasting towards the finish-line thereafter. Fortunately, the momentum is enough, it can do so with relative ease, even if the finale plays out more generically than the first half deserves. It’s still a better film about teen pregnancy than Juno, and makes for better high-school horror than Jennifer’s Body. I can almost hear Diablo Cody weeping with incandescent rage.