Fredianelli may be the most prolific film-maker you’ve never heard of. Still in his thirties, the IMDb currently lists him with 41 movies to his directorial credit, since he debuted with Pale Blue Balloons in 2008. Last year, this was just one of four features; and he was clearly slacking off, as 2018 saw him direct no fewer than seven. Many are posted for free on his YouTube channel – he seems to be much more about making films than making money from films, which I have to respect.  The story in this one is relatively basic: Sloan (Darvin) comes out from her underground bunker where she has been sheltering in place, while everything went to hell in a hand-basket. She seeks to track down her spouse, Charles (Camilleri) and daughters, in a world now ruled by The Disciples, where violence and radiation blight – from which hubby is suffering – are everyday hazards. 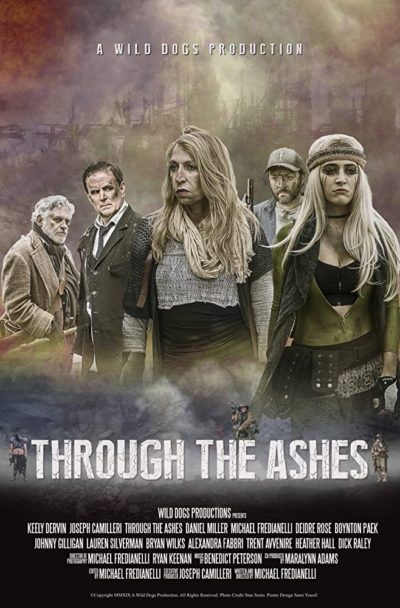 He clearly loves him some action, though it’s a particularly mixed bag. The opening gunfight is far from convincing. Two people, one of whom has barely held a firearm before, both armed with handguns, are somehow able to defeat a slew of Disciples armed with automatic weapons? I wasn’t sold at all. On the other hand, the action highlight is likely a car-chase involving three vehicles, two of which are heavily Mad Max‘d up with weapons, fighting each other along a stretch of road in front of spinning wind turbines. While I’m not sure quite how that backdrop fits the supposed desolation and collapse of civilization, I won’t deny, it all looks pretty damn cool, and was impressively staged.

Dervin delivers a decent enough performance as the heroine; she looks more like a concerned mother than Imperator Furiosa, and that’s okay. My problems were more with the plotting, which never gels into a coherent whole. The film feels like a series of separate incidents, which happen to the same people, without any sense of escalation of progress. I’ve no clue, for example, of any time-frames here. How long was Dervin in her bunker? Apparently long enough for everything to go full-on feral – not least, one of her daughters. Yet not long enough for her husband to get out of the suit he was wearing when he was abducted? There’s also no resolution: it definitely loses points for setting the whole film up towards an assault on the Disciples’ stronghold, then failing to deliver.

Still, there was enough entertainment value here that I’d not be averse to checking out some of Fredianelli’s other work. Though my unwatched movie pile likely makes that something of a low priority.