While it’s hard to imagine two Ridley Scott movies further apart than this and Blade Runner in terms of subject matter, they shared surprisingly similar fates. Both were interfered with by the studio as a result of poor test screenings. Both were greeted with lukewarm critical reception and poor box-office performance at the time of their original release. However, both have subsequently been re-evaluated and received a much better response. Workprints of each film were found decades later, and used to reconstruct the director’s original vision. Oh, yeah: and unicorns play an essential role in both. Though I’m not quite sure why the ones in Legend appear to be accompanied by whale noises. Maybe it’s a narwhal reference? 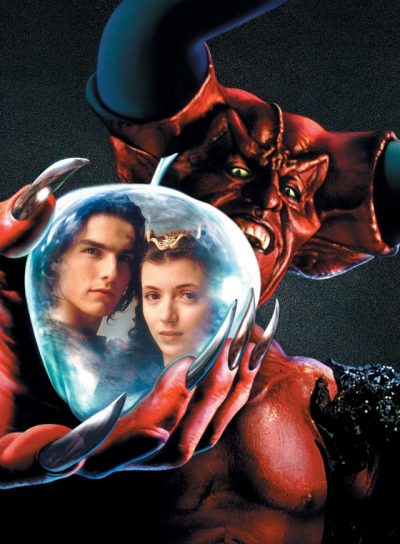 Certainly, as with Blade Runner, the changes make a radical difference – probably even more so here, which isn’t surprising, considering the sheer volume and scope of them. The original first cut of the film ran 125 minutes, with Scott then trimming down the work print to 113 minutes. However, preview audience were unimpressed, and further edits were done, as the film’s release was pushed back from June to November, trimming close to 20 additional minutes. But, wait! There’s more! [Or, rather, less] For before its release in America the following April, the 94-minute European version lost five more minutes, along with Jerry Goldsmith’s orchestral score, which was replaced by the electronic doodlings of Tangerine Dream.

Frankly, it’s remarkable the film managed to survive at all. Between this and what happened to Blade Runner, no-one would have blamed Ridley Scott for thinking “Bugger this for a game of soldiers,” and moving to Nepal to become a Buddhist monk. This is probably Peak Ridley, in terms of its absolutely luscious visual style, though we certainly have to thank its cinematographer, the late Alex Thomson, for his contribution. Every shot feels more like a lovingly-painted illustration from a book of fairy-tales, even if there’s so much crap floating in the air – snow, pollen, peeved fairies – it sometimes feels as if the DVD should come with a coupon for a free packet of anti-histamines.

It is among the most beautiful looking films of all time for me, and certainly helps counter its weaknesses, which are plentiful enough. The story feels like an 11-year-old Narnia fan describing Lord of the Rings second-hand, with a band of plucky woodland dwellers venturing into the heart of darkness in order to stop the big bad from… Well, in this case, getting into Princess Lili’s collection of Hot Topic underwear, it appears. For with the world teetering on the edge of perpetual darkness, the Lord of Darkness (Curry) is otherwise engaged, busy using his smoothest chat-up lines on Lili (Sara), such as “Are you so eager to see blood flow?” and “We are all animals, m’lady.” Note to self: If ever I become an evil overlord, I will make priority #1 securing world domination. The eye-linered totty will just have to wait.

That said, Tim is far from a problem. Indeed, he is nothing less than awesome, and should have at least been nominated for a Best Supporting Actor Oscar, since his performance is utterly magnetic. Doing it under a hippo’s worth of Rob Bottin’s finest make-up, is even more impressive. However, it’s never quite clear exactly who he’s supposed to be: if it’s Satan himself, it’s a peculiarly mopey, emo version, lacking in self-confidence, and there’s evidence to suggest he is simply a devil rather than The Devil. At one point, he refers to his “father”, and William Hjortberg’s original script included a conversation with said parent, who offered a bit of father-son advice on the topic of girls – from which, I can only presume he’s a subscriber to /r/TheRedPill.

“What pleasure comes from ruling a pack of imps and goblins? Souls already black. This innocent creature fascinates you because only she can appreciate the enormity of your achievement… She remembers the world as it was: when she loves your new order, you will triumph! Woo her. Win her. Break her spirit.”

Or possibly a Scientologist. That’s my not-so subtle segue to discussing the presence of Mr. Operating Thetan himself. Casting Tommy Boy as Jack, the heroic lead, perhaps made sense at the time, though even then, Tom Cruise was known more for dancing around in his underwear than anything. Now? There’s something disconcerting, and vaguely creepy, about watching Ethan Hunt (or Jack Reacher) roaming the forest, wearing a pair of scale mail jhorts. No-one ever gets to complain about battle bikinis again. I must confess, I laughed out loud when the fun-sized Jack punched the Lord of Darkness once, and the victim reacted like Glass Joe. I think Blix the goblin would have taken the hit better.

I did appreciate the climax didn’t rely on fisticuffs for the good guys to win (and I use the word “guys” loosely; Jack’s motley crew includes dwarves, something that might be a grumpy elf, and a Tinkerbell wannabe who owns a +3 Aerosol of Infinite Hair Lacquer). Instead, they use a cunning system of shiny objects to bring sunshine into the depths of the Lord of Darkness’s realm, a nice metaphor for evil being unable to withstand the light of day. [Or, apparently, a punch] Though further note to self: If ever I become an evil overlord, do not go around saying things like, “Sunshine is my destroyer,” especially if it is. And Sara, the future ex-Mrs. Ferris Bueller, acquits herself well in what’s effectively two roles, demonstrating a larger, more interesting character arc than anyone else.

It’s highly-flawed, yet remains immensely watchable despite its obvious and undeniable weaknesses. Yes, the plot doesn’t stand up to scrutiny, perhaps having been smeared with more Vaseline than the camera lens. But it’s a fairy story, and complaining about its logic makes about as much sense as pointing out that mirrors can’t actually talk. Just suspend your everyday brain function and wallow in its copious dollops of gooey eighties style.